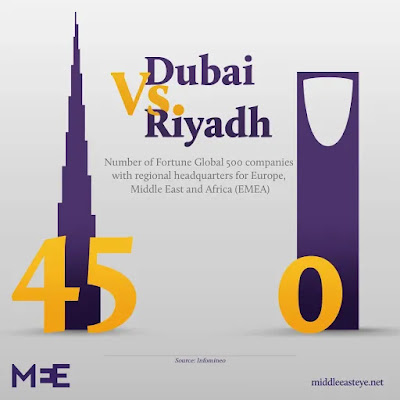 Middle East Eye: In the pre-pandemic days of globalisation, countries competing in emerging markets were often engaged in a "race to the bottom" to attract multinational companies, which typically involved offering them incentives such as tax breaks and favourable labour laws.

More recently, governments with large enough economies have opted for the stick-over-the-carrot approach in allowing companies to set up shop, often for political objectives.

Last year, for instance, Turkey passed a law requiring any social media platform based abroad with over one million daily Turkish users to set up a representative office in the country.

Saudi Arabia is taking a leaf from the same playbook as it grapples with the economic fallout of the Covid-19 pandemic and embarks on its ambitious Vision 2030 plans.

In mid-February, Minister of Investment Khalid al-Falih announced that any company seeking contracts with the government, state-owned firms and the Public Investment Fund (PIF, the sovereign wealth fund) will have to base its regional headquarters in the kingdom by 2024.

Saudi Arabia is hoping that the allure of being the Middle East’s biggest economy, with hundreds of billions of dollars earmarked for mega-projects over the coming decades, will force companies to comply.

“There was surprise at the announcement, and there are some merchant families that will not be happy,” said Theodore Karasik, a senior adviser to Gulf State Analytics, a Washington-based consultancy.

“But at the same time, others will see the benefit of such a regulation, and in how the city states of the Arabian peninsula interact with each other for recovery purposes. Because of Covid-19, they are rebooting and restructuring their economies."

The requirement, called “Programme HQ”, is still at the discussion phase, with “as many questions as answers. It is a reminder of the intense competition for investment within the Gulf Cooperation Council,” said Rachel Ziemba, a non-resident fellow at the Gulf International Forum, a Washington-based institute.

To read the rest go to: https://www.middleeasteye.net/news/saudi-arabia-uae-dubai-programme-hq-rival-business-hub

Posted by Paul Cochrane at 3:51 PM

Too Much Work Load said...

Great article, and looks more competition between brother than anything else. However, I believed Saudi Arabia needs this infrastructure to become a superpower in the region, which is what there are trying to do. Please, keep up with new updates about Saudi Arabia's modernization efforts.