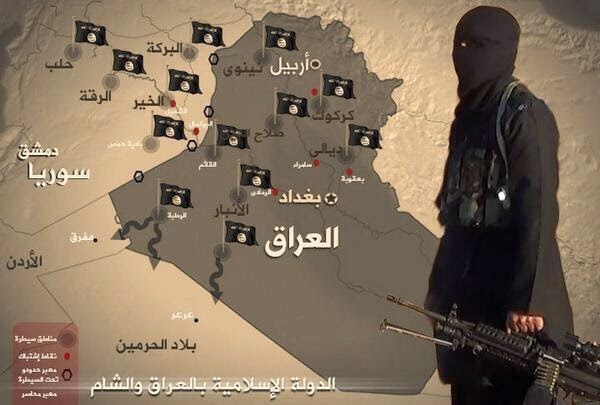 A screen grab showing where ISIL is operating in Iraq and Syria.
Image from - http://syria.alsafahat.net


The most sophisticated terrorist force yet seen, Islamic State has built a varied funding infrastructure that is set to take easily as long to disable as its military assets. Paul Cochrane, based in Beirut, goes in search of the IS backers.

Iraq and Syria are major hot spots in the fight against terrorism financing. Numerous militant Islamist groups are in operation, most notably the Islamic State (IS), with revenues derived from multiple sources, including extortion, seizures of grain, sales of oil, private donations and charities.
While an international campaign is underway to remove such groups and funding from the financial system, within the Middle East there is a consensus amongst governments that more needs to be done to curb the movement of funds.
The rise of the Islamic State of Iraq and the Levant (ISIL) - an earlier name - replaced by Islamic State in June, has put terrorist financing firmly back on the global political agenda. The militant organisation had been growing in strength in Iraq and in neighbouring Syria since the uprising against the regime of President Bashar Assad became increasingly violent from 2011 onwards.
In early 2014, ISIL caused shock-waves around the world when it took the Iraqi city of Mosul, consolidating gains made in broad swathes of northern Iraq and northeastern Syria. Working with former members of Iraq's Baathist party, ex-soldiers and foreign fighters, ISIL is "the best-funded terrorist organization we've confronted," said David Cohen, undersecretary for terrorism and financial intelligence at the US department of the treasury, to the press in April, 2014.
As a result, financial controls have been imposed in parallel with the military action launched in August (2014) by a US-led coalition, with the US Joint Chiefs of Staff chairman General Martin Dempsey estimating in November it will last for "up to four years."

Military action was accompanied by the United Nations Security Council passing Resolution 2170 (August 2014) "to suppress the flow of foreign fighters, financing and other support to Islamist extremist groups in Iraq and Syria." It noted that the asset freeze, travel ban and arms embargo requirements in paragraph 1 of Security Council Resolution 2161 (2014) apply to IS, the Al Nusra Front (ANF) - another jihadist group, "and all other individuals, groups, undertakings, and entities associated with Al-Qaida." Six individuals were named in the annex subject to travel restrictions, asset freezes and other measures targeted at Al-Qaida affiliates (IS leader Abu Bakr Al-Baghdadi was not among them, having been listed in 2011).
In October, global AML agency the Financial Action Task Force (FATF) issued a statement on combating the financing of terrorism CFT, which included an announcement that its officials had "decided to look at the source and methods of funding for ISIL." (1)
The ongoing air campaign has so far not crippled IS, while efforts to curb financing have proven elusive. As Cohen said: "We have no silver bullet, no secret weapon to empty ISIL's coffers overnight."

Part of the problem is that IS, along with other organisations, has avoided using the conventional financial system due to heightened scrutiny and regulations, while aiming for operational independence through not relying on donors. "ISIL doesn't need private donor support as it is annoying to have ideological requests and meetings, so if they don't need it, why want it?" said Elizabeth Dickinson, Middle East editor at Monitor Global Outlook, and author of Brookings paper "Playing with Fire: Why Private Gulf Financing for Syria's Extremist Rebels Risks Igniting Sectarian Conflict at Home".

According to the US Treasury, IS is generating revenues of around USD1 million-a-day from sales of oil from wells it controls in Syria and Iraq, and extortion, smuggling, taxing locals and transport routes, as well as using kidnapping-for-ransom (KFR). "Apart from state sponsorship, KFR is today's greatest source of terrorist funding and the most challenging terrorist financing threat," said Cohen.
IS is also generating operating revenues from the sale of stolen grain. In November, Iraq's agriculture minister said in a statement that IS had stolen over 1 million tonnes of wheat and barley in Nineveh Province and smuggled it to Syria, while in August, IS seized 40,000 to 50,000 tonnes of wheat. ISIL is believed to control a third of Iraq's wheat production area and nearly 40% of its barley production.

A seizure of data in Iraq in June 2014, indicated the group has US$875 million at its disposal, and when including other assets such as stolen antiquities, heavy armour and the like, assets of up to US$2 billion.
According to press reports, IS seized half a billion dollars from the Central Bank of Iraq branch in Mosul, although Ahmed Salah Hashim, Associate Professor at the military studies program at the Rajaratnam School of International Studies in Singapore, questions this amount, saying it is unlikely the bank would have held such money in reserve, especially given the high levels of corruption in the country.
Ultimately, IS and other militant groups' finances are not clear. "There is a big black hole in understanding the financing of these groups as there is so little information out there," said Hashim.

While private donations are not considered to account for a major slice of IS, ANF and other groups' finances, funding has nonetheless trickled in from sympathisers. Cohen singled out Arab Gulf states, Kuwait and Qatar in particular, where fundraisers are "soliciting donations to fund extremist insurgents, not to meet legitimate humanitarian needs."
Dickinson said Cohen's speech highlighted two points. One is that it takes time for designations to come into force. "The second point is that when I talk to Treasury folks, these public statements are indicative that progress behind the scenes is not fast enough. It is only really when conversations don't make progress that the Treasury makes such a statement," she said.
Kuwait was considered an epicentre of funding, with Arabic daily Al Hayat reporting that in 2013 alone "Kuwaitis supported the Syrian revolution with approximately USD$100 million."
But as ISIL became increasingly powerful and a force to be reckoned with, Gulf states have started clamping down on fundraising, and in November, Bahrain hosted an international summit, the Manama Meeting on Combating the Financing of Terrorism.
Since her investigation into fundraising in Kuwait in 2013, Dickinson said there has been significant change in the country. "Before it was a public phenomenon, with posters naming fund-raisers. All of that has stopped because of government pressure. A key point I made was that funding spiked in 2012 and since then is going down, for one because many people have become disillusioned with the conflict. Now you are left with core funders, including ones that are sanctioned, and they're nervous about their predicament in Kuwait as the government has started taking away nationality from prominent (political) critics and fear the same could happen to them," she told the Money Laundering Bulletin.
Qatar, on the other hand, has made less progress than Kuwait and Saudi Arabia, with the latter banning unauthorised fundraising campaigns for Syria. Hashim said there was "a bit of ambiguity" as to whether the Qatari government was involved in financing ISIL and ANF, with the country having openly backed the rebel groups in Syria from the get-go.
"Qatar didn't have networks in Syria when it was building up the opposition, so instead worked through a strange web of middle men, and funneled money through them to brigades on the ground. It operated similarly to private donors, but some (of the funds) were coming from the government," said Dickinson.
Since Kuwait started cracking down, networks have moved to the Qatari capital, Doha, to solicit donations. "People designated by the Treasury are still operating with complete immunity in Doha," she added.
Turkey is another area of concern, with Ankara having allowed the flow of funds and weapons across its border with Syria to aid rebels groups. While there have been allegations of Turkish government support for IS and ANF, there has been no firm proof, and analysts suggest that funding is coming from Turkish Islamists, just as in the Gulf countries.

While Middle East and North African (MENA) countries have pledged to improve compliance and CFT enforcement, a senior compliance officer at a regional bank that wanted anonymity said they have not cleaned up their act as stated in public. A key reason for this, he said, was that MENA countries do not have a unified view on the definition of terrorism.
Compliance has also been lacklustre in certain jurisdictions, Turkey in particular, which has been under the FATF spotlight for the past few years, only in early 2014 implementing CFT legislation. Furthermore, FATF, following its October plenary, considers Iraq, Syria, and Kuwait jurisdictions with strategic AML/CFT deficiencies.
Non-profit organisations (NPOs) are another area that is being exploited to fund terrorist organisations in Iraq and Syria. This is an area of particular concern as compliance with FATF's Recommendation 8 on NPOs is low worldwide. "The problem has been implementation on the ground by various governments. A lot of jurisdictions have not gotten regulatory capacity and tools up-to-speed," said Ian Lye, former Head of Terrorism and Insurgency Research at Thomson Reuters, (now working at JP Morgan Singapore.)
NPO compliance in the MENA is particularly low. "All NPOs are high risk entities that can easily hide sources and destinations of funds. Moreover, many are controlled by well-known entities or religious bodies. Steps should be taken towards regulating these entities in the MENA," said the compliance officer.
Adding to concern is that aid workers may be radicalised and return to their home countries. "Indonesian charities send food, supplies and money to Sunni fighters as relief aid, but to the consternation of Jakarta these aid workers morph into Jihadis," said Hashim.

1) http://www.fatf-gafi.org/documents/documents/fatf-action-isil.html
Posted by Paul Cochrane at 6:59 PM No comments: