In 2020 as more of life went online, we ask: What are the limits to Virtual Islam?

Salaam Gateway: In 2020, more of life went online than ever before, including religious activities. Prayers and lectures were streamed over platforms like Zoom, and Ramadan virtual iftars became commonplace.

Will this become the 'new normal', as believers accept the shift to a virtual religious life amid COVID-19, possible future pandemics, and looming challenges like climate change, which may affect the very way hajj is carried out? Is Virtual Islam on the horizon?

“It is a transformative moment in some respects because the traditional religious establishment within Islam is having to rapidly adapt to modernity in its fullest sense, not just because of COVID-19, but of where human society is,” said Adnan A. Zulfiqar, Associate Professor of Law at Rutgers Law School, USA.

As religious life went online with earnest earlier in the year, especially in the lead up to Ramadan and during the holy month itself, certain questions were raised about religious obligations and practices. Religious leaders, for instance, were careful to virtually present lectures instead of actual sermons as they were not physically in mosques with their congregation.

“Another dimension has been opened up: to what extent is ritual practice and worship able to be conducted through technology? There has been a real struggle over this,” said Zulfiqar, who has researched Islamic legal responses to COVID-19, including congregational prayers and funeral rights.

“The idea of conducting your Friday prayers via Zoom, where people are in various locations and the prayer leader in another - is that permissible? There has been, frankly, a lot of resistance to that, as if you open up the space of ritual practice, essentially you are giving everybody a marketplace in which they can choose. If you say this is just for COVID-19, to what extent can you later on put the genie back in the bottle?”

A technological shift was already underway before the pandemic confined people to their homes, and apps were launched to book prayer slots at mosques once stay-at-home restrictions eased.

Zulfiqar noted that fatwas have been increasingly issued verbally or through visuals on social media platforms rather than via the printed word. “Islam is much less written than it was before. Traditionally speaking, there is a really formal way that fatwas are written, but I often couldn’t find them written down. People have become comfortable with the (fatwa's) presentation by video as its the primary medium out there,” said Zulfiqar.

The generational gap over technological adoption, and acceptance, has also become more pronounced. “The physical sacred space is historically, and for the human psyche, so important that it will be difficult for the virtual to completely take over, but we will see. You already have in a lot of the Muslim diaspora third-way movements that are essentially 'un-mosqued', of young people gathering virtually but also organising virtually and meeting outside of the mosque or masjid,” said Zulfiqar.

To read the rest go to: https://www.salaamgateway.com/story/in-2020-as-more-of-life-went-online-we-started-asking-what-are-the-limits-to-virtual-islam

One month until ‘Brexit’: Is the UK looking to seal a Gulf free trade deal?

With talks with the EU still deadlocked, London is looking to forge closer trading ties with the GCC

Middle East Eye: The British government has been scouting the world to drum up business with the clock ticking down as it prepares to finally exit the European Union at the end of the year.

And while discussions over the UK’s critical future trade relationship with its erstwhile EU trading partners still appear deadlocked, London has its eyes set on securing a free trade agreement (FTA) with the Gulf Cooperation Council (GCC) countries.

Inking an FTA would be a big headline grabber for Downing Street, with bilateral trade worth $60.1bn in 2019, more than with India and Canada combined.

Some analysts suggest that the British government could attempt to package its lucrative arms dealings with the Gulf states into an agreement, even with weapons sales to Saudi Arabia the subject of a continuing legal battle focused on allegations of war crimes carried out by Saudi-led forces in Yemen.

But is an FTA likely to actually materialise, given the GCC’s current internal divisions – over Qatar – and its weak track record in actually ratifying such agreements? Furthermore, what benefits are there for both parties?

To read the rest go to: https://www.middleeasteye.net/news/brexit-uk-gulf-free-trade-deal-seal

The US's long financial war on Hezbollah - and Lebanon

The United States has piled sanctions on the Lebanese movement, but to what effect? 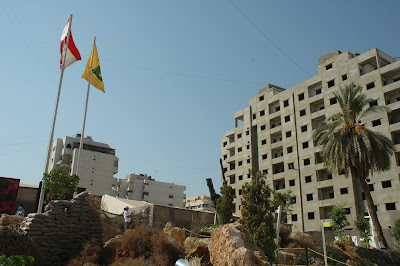 The Lebanese and Hezbollah flags fly above Bayt Al Ankabout - The Spider's Web - a Hezbollah exhibition about the 2006 War in Beirut's southern suburbs. (Paul Cochrane)

Middle East Eye: Over the past two decades, Lebanon has been under close scrutiny from the US Treasury for potential money laundering or financing of US-designated terrorist organisations.

This has led to two banks shutting their doors, bans on the use of Paypal and other payment operators, headaches for ordinary Lebanese to make transfers, and lots of pressure on banks to comply with international standards.

The reason for such scrutiny is straightforward.

“Lebanon is always under the spotlight because Hezbollah is in Lebanon,” said Wissam Fattouh, the secretary-general of the Union of Arab Banks to the UK publication Money Laundering Bulletin.

But in a first for the US Treasury, which has focused more on curbing Hezbollah’s financial operations over the years than going after corrupt Lebanese politicians, it sanctioned Gebran Bassil, former foreign minister and head of Free Patriotic Movement, which holds the biggest bloc in parliament, for corruption earlier in November.

The move has been widely considered as linked to Bassil’s ties to Hezbollah.

Such moves come amid the heightened use of sanctions by the US government against governments and political parties it opposes, from plans to intensify sanctions on Iran until President Donald Trump leaves office in January 2021, to sanctions against Syria, Venezuela, North Korea and China.

A new bill was proposed in September, the Hezbollah Money Laundering Prevention Act of 2020, “to stop the Iranian backed terrorist organization Hezbollah’s money laundering activities across the world, especially in Lebanon and Latin America.”

To read the rest go to: https://www.middleeasteye.net/news/lebanon-us-hezbollah-financial-war-sanctions