Due to the tanking economy and widespread violence, more than 4 million people have left Syria, either taking their cars with them to neighboring countries or selling them. The automobile sector slowly has morphed into a used-car market. 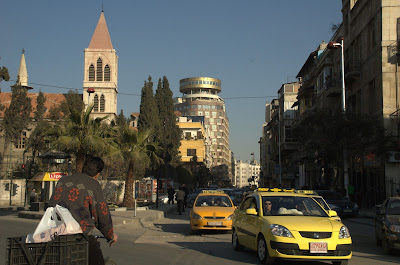 
BEIRUT - The Syrian car sector has been hit hard by the country's ongoing civil conflict, now into its sixth year.

From nearly 90,000 vehicles being imported into Syria annually before the rebellion against the rule of President Bashar al-Assad started in 2011, imports have plunged to about 1,000 a year. But despite a burgeoning used-car market and rampant smuggling of stolen cars, an agreement was signed this year to locally manufacture China’s Dongfeng Motor DFM brand. Production started in February in the city of Hama, north of Homs, well within the government-controlled zone of Syria.

The country’s once-burgeoning car market had seen sales surge after the government reduced import duties in 2005, from 255% to 60% for cars above 1.6L, and from 145% to 40% for those with smaller engines. Indeed, in 2010, Syria imported some 87,000 cars, double that of neighboring Lebanon, although small on a per-capita basis, given Syria’s population of 18 million compared with Lebanon’s population of 4 million at the time.

European, Japanese, South Korean, Iranian and Chinese cars were selling well, while American models not built in the U.S. also were available in the market (Syria had imposed high customs duties on U.S.-made products).

When anti-Assad demonstrations broke out in March 2011, sales started to plunge due to political instability. “The new-car market has taken a nosedive, as no one is willing to buy a car in case the window is blown in by an explosion or it’s taken at a (military or militia) checkpoint,” says a former car dealer now living in Beirut, Lebanon, who asked to remain anonymous.

Even many bureaucrats avoid using new and official cars in the areas still under government control, instead using yellow cabs, typically Chinese or Iranian brands.

The sanctions imposed on Syria in 2011 by the European Union and the U.S. cut the country out of the Society for Interbank Worldwide Financial Telecommunication transaction network and from using U.S. dollars and euros.

With the Syrian government burning through its foreign reserves, in the fall of 2011 a ban on automobile imports was announced, with the Central Bank of Syria’s governor saying the import ban would save $4.5 billion in scarce foreign currency. The decision was overturned following pressure from car dealerships, says Jihad Yazigi, editor of the Syria Report financial newsletter.

At the same time, the Syrian pound started to depreciate, eventually reaching SYP520:$1 in 2015, from SYP47:$1 in 2011. The pound remains weak, with black-market rates being the key rate given that formal international trading in the currency largely HAS ceased, making imported cars prohibitively expensive for Syrians still earning and using the local currency.

As the conflict spread around the country, sales dropped even further. According to Syrian newspaper Al Watan, about 1,000 cars were imported each year in 2013, 2014 and 2015. Figures for 2016 are not yet available and those statistics cover government-controlled areas only, although the government does officially run the largest population centers, including most of Damascus and Aleppo.

Due to the tanking economy and widespread violence, more than 4 million Syrians have left the country, either taking their cars with them to neighboring countries or selling them.

The automobile sector slowly has morphed into a used-car market. “The used market has been growing the most, and the stolen-car market,” the dealer says. “A lot get stolen in the country and then shipped out, but many are stolen in Lebanon, Turkey and Europe that end up in Syria.”

He adds that his dealership sold just six cars in 2016, all from 2012 inventory. “There’s no way we’d spend hard currency to ship cars to Syria that would sit in a lot waiting to be sold, as anything could happen. The risk is way too high.”
The Syrian government last September banned the importation of cars until the end of the year. No reason was given, but Yazigi believes it was to further reduce imports and retain much-needed foreign currency.

Data on locally produced cars is minimal but is believed to be in the low thousands for Iranian brands Khodro and SAIPA, manufactured through Iranian-Syrian joint ventures in Damascus and Homs. In February, Syrian company Khallouf Trading announced it was starting the production and sales of two new locally assembled cars under license from China’s DFM brand: the S50 sedan, which will be priced at SYP9 million ($18,000), and the all-wheel-drive AX7, priced at SYP13 million ($26,000).

Sales of the new vehicles are expected to be driven by the import ban, bolstered by the availability of spare parts and aftersales service, as spare parts are hard to import into the country due to sanctions.

There is demand for high-end cars from a rising class of war profiteers. “There is a nouveau riche (clientele) buying supercars. It is surprising in a conflict to see a $1 million Bugatti with Syrian license plates,” the dealer says.