Arab bankers: US financial rules turn us into 'spies for the CIA' 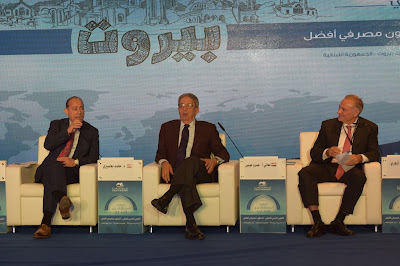 BEIRUT - Arab bankers have had enough of being at the receiving end of US regulatory diktats. After years of reluctant compliance, they are finally speaking out. In November, they proposed establishing an Arab banking lobby to try to have a say in US and international regulations.
Middle East and North African (MENA) banks have been under the US financial regulatory spotlight since the Patriot Act was rammed through Congress in 2001 and the onslaught of the open-ended "War on Terror".
The MENA financial sector has had to comply with a barrage of US rules and OECD "recommendations" to be in line with international norms on anti-money laundering (AML) and countering the financing of terrorism (CFT). Banks have also had to adhere to economic sanctions against certain countries (Syria, Sudan and Iran), and screen for thousands of names on regulatory blacklists.
On top of that, MENA banks, like everywhere else in the world, have had to adopt, at significant cost (some $8bn worldwide), US legislation like 2014’s Foreign Account Tax Compliance Act (FATCA). FATCA is an attempt to repatriate tax dollars and requires non-US financial institutions to provide information on US account holders to the Internal Revenue Service (IRS).
The cost of non-compliance? Being cut off from correspondent banks in the US, which means being denied US dollar transactions and access to the international banking system. That is significant as around 64 percent of all global foreign currency reserves are in US dollars.

'The regulator is the devil'

At the Union of Arab Bankers’ (UAB) annual conference in Beirut on 24-25 November, the atmosphere was different from previous years.
Gone was the attitude of resignation, that "we have no choice but to comply," and touting to the world that Arab banks are following the rules. Instead, the mood was one of assessing the collateral damage, with sessions on "The Impact of the Arab & International Political Developments on the Arab Banking Sector," and the "Impact of International Regulations on the Funding Policies of Arab Banks".
During one panel discussion, the MENA head of Reuters’ governance, risk and compliance services, Mohamed Daoud, asked delegates: "Who is your financial regulator?" One attendee, Osman El Toum El Hassan, general manager of Sudan’s El Nilein Bank, stood up and said, "Theoretically the central bank but in reality the regulator is the devil."
"The CIA," another banker shouted out.
There were laughs, nods and knowing looks in the audience, aware that their central banks were not to be as feared as the US Treasury. It was not what you would usually expect from the conservative banking community. Again and again, the bankers spoke out about the problem of being at the receiving end of foreign regulations, de-risking, and that the MENA region was being unduly singled out.
One attendee expressed his dislike of FATCA, saying: "We have to be spies for the US". Under the act banks have to effectively be agents of the IRS. It was a point emphasised by Abdullah al-Saudi, CEO of ASA Consultants. "Arab banks are spies on people with American passports," he said in a speech.
The driving force of discontent was the de-risking going on, with some six MENA banks having lost their correspondent banking relationships with the US over the past year. The prime reason is the lack of profitability for US banks. To not get fined by US regulators, American banks have to carry out strenuous due diligence and auditing to ensure the Arab bank has done its own compliance work.
Unless a major Arab bank, such effort is not financially worth it for the potential risk involved. The irony is that Arab banks have to abide by domestic US legislation to continue their own domestic operations, with US correspondent banks even scrutinising local transactions – which do not leave a country’s jurisdiction – in the advent of wider money laundering within the Arab bank.
In the case of Lebanon, due to the US’s Hezbollah International Financing Prevention Act of 2015 - which intends to "prevent Hezbollah's global logistics and financial network from operating in order to curtail funding of its domestic and international activities" - local banks cannot have accounts for Hezbollah members, even though the party is a legal entity in Lebanon and has 12 members of parliament.
Lebanese banks have also been under pressure to not deal with Syrians due to the 2011 sanctions by the US and European Union on Syria, which is a serious problem for the estimated 1.5 million Syrian refugees in Lebanon. Due to such regulations, Syrians complain of not having access to the financial sector. Legitimate businesses struggle to make regional and global transfers, and anyone with the name Mohammad, Ali or Osama gets extra scrutiny.
"We’re part of the international community, but we are never asked our opinion, it is imposed on us," El Hassan said. "Why is a Sudanese prevented from sending $100 from Saudi Arabia to his relative in Sudan? I will never support any law that deprives people of their basic human rights."

As is often the case with international regulations, they are one-size-fits-all, not taking into consideration local cultures and ways of doing businesses.
For example, 88 percent of Sudanese do not have bank accounts, according to El Hassan, as Sudan is a cash-based society. He said clients do not grasp the concept of money laundering and are puzzled by Know Your Customer (KYC) questions asking if they are married, have kids, or rent or own a house when they want to buy a car.
"When we explain to people what money laundering is, no doubt one out of a 100 will now go and try it," he said. Over in Egypt, out of 91 million people, just 7 percent of Egyptians are estimated to have a bank account.
But despite such realities, there is minimal understanding of the issues on the ground.
"It is as if the MENA has become an embargoed region and outsiders have limited dealings with us. It is as if compliance is focused on Arab countries, and it is chaining the banking sector, not taking into account local cultures," said Dr Ali Hasan Ismail, governor of the Central Bank of Iraq, at the UAB conference.

While compliance experts in the West have stated that AML and CFT regimes need to be overhauled to be more effective (as Chip Poncy, a former US Treasury official, said at 2013’s UAB conference), the rules have not changed. Instead, business has become harder in a region beset with political and economic turbulence.
Indeed, the phenomenon of de-risking can undermine development, which is exactly what the MENA region does not need in the current environment. According to a recent report from the United Nations Economic and Social Commission for Western Asia, the GDP economic losses from the conflicts in Yemen, Syria and Libya are around $425bn, while reconstruction costs in the MENA are estimated at $614bn.
Countering the US’s regulatory strength and the dollar’s hegemony by having even a small voice in the drafting of US and international regulations will not be easy. Conflict in the region is an obvious dampener for cooperation, while massive economic disparities exist between the hydrocarbon rich Gulf countries and the Levant and North Africa. The Gulf monarchies themselves do not see eye-to-eye, and the Arab League kicked Syria out of the organisation in 2011.
Previous attempts at cooperation have not panned out. In 2008, after 27 years of deliberations, the Gulf Cooperation Council (GCC) Common Market was announced to much fanfare but has been a damp squib, largely due to bickering over where a GCC central bank would be located.

Moreover, the region cannot resort to using oil as a bargaining chip for a place at the regulatory table, unable to repeat OPEC's oil embargo on the West for its support of Israel in the 1973 war.
What the region has is a degree of financial power, with the total assets of Arab banks estimated at $3.2 trillion, although that figure is less than the US Federal Reserve’s assets and the combined wealth of the 500 richest people, at $4.5 trillion each respectively.
Such realities did not prevent conference delegates arguing the need for a banking lobby to be a part of the decision-making process.
"Instead of the Arab world being on the receiving end, we must take part," said Mohamad Baasiri, Vice Governor of the Central Bank of Lebanon. Amr Moussa, former secretary general of the Arab League, proposed that a lobby should not consist of all 22 countries in the League but select countries, like Lebanon and Egypt, to be more effective.
But overall, despite attendees’ anger at their powerlessness in the face of US and international regulatory diktats, there was a resigned acceptance of the fact that the kind of unity needed was unlikely to happen. As one senior member of the Lebanese Central Bank who wished not to be identified said, the idea was "utopian thinking, it will never happen".
"We Arabs speak more than we act," one participant said to claps and attendees saying "true".

Alternatives to the US dollar

Yet there was also the macroeconomic view. "Could any country or region stop FATCA? Even the EU couldn’t," said El Hadi Chaibainou, general manager of the Groupement Professionnel des Banques du Maroc. Neither could Russia or the world’s rising superpower, China, for that matter.
In a time-will-tell approach, bankers talked of looking to alternatives to the US dollar, such as the Chinese RMB, which is growing in status as a global currency reserve.
Nevertheless, the fact that the idea of an Arab banking lobby was being discussed, and that the acceptance of US diktats is not what is was just a few years ago, is telling, especially in a seemingly changing global order and the question marks raised by the upcoming presidency of Donald Trump.
Posted by Paul Cochrane at 11:32 AM