Universities in Egypt are investing in nanotechnology to address some of the country’s pressing problems. 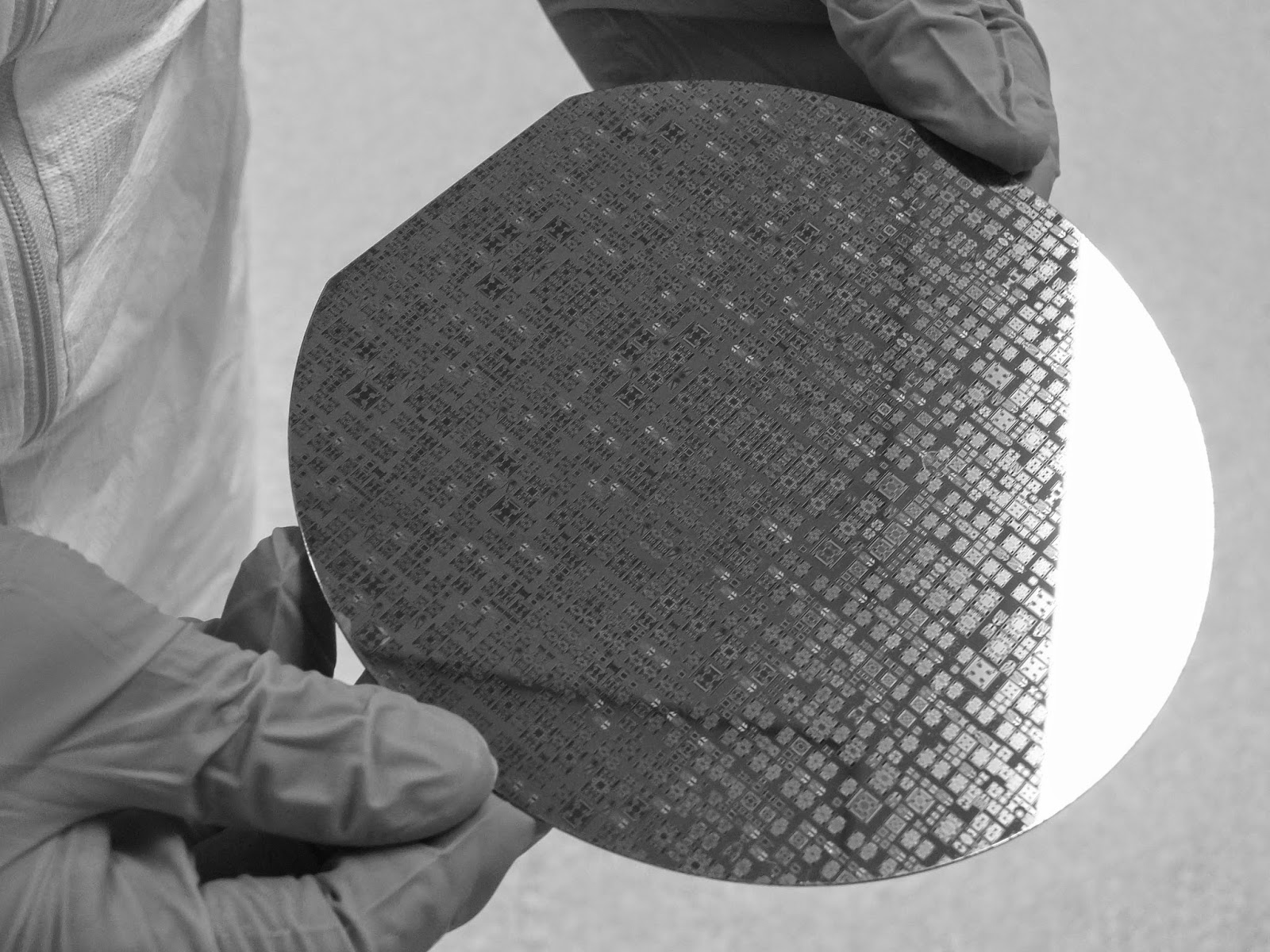 A silicon wafer in the clean room


A khamseen engulfs Cairo; dust is everywhere, coating all surfaces and there is grit in one’s teeth. It is not an ideal day to visit a ‘clean room’ where technology is used at the nanoscale. Nano means one-billionth, so a nano-meter is one-billionth of a meter, or 1/1,000th the thickness of a human hair. At that scale, dust particles are huge. But safely zipped up in an all-in-one protective suit and the air-filtration system pumping away, the environment can live up to its name.
The 150 square meter clean room at Zewail City of Science and Technology in 6th of October City, outside of Cairo, is the largest in Egypt and aims to take nanotechnology development to the next level. The American University of Cairo (AUC) is equally at the frontiers of nanotech, but does not have the same facilities – just 20 square meters compared to Zewail’s three rooms, including a wet area. Zewail City, brainchild of the 1999 Nobel Laureate in Chemistry, Ahmed Zewail, aims to address some of the core challenges scientific research and development faces in Egypt. The country is not short of brains, but access to funds, equipment and cooperation with industry has been lacking.
It is still early days, said Professor Sherif Sedky, Academic President of Zewail City and Director of the Center for Nanotechnology, with expectations for greater application of nano devices and smart nano gels, for example, in the next two years. Zewail City is tapping into the local talent available by actively cooperating with other education institutions. Professors from AUC, like Sedky and Dr Nageh Allam, assistant professor of physics at AUC, are pushing such developments.

The dust storm ranging outside is thematically appropriate. Some of the nanotech research underway at Egyptian institutions is aimed at tackling climate change and other pressing problems such as water and energy. For instance, Allam, who also teaches at Zewail City, is working at the micro and nano level on desalinization to address the issue of water scarcity. “We have the Mediterranean and Red seas, so the aim is to make nano materials hold the salt from sea water to give fresh water,” he said. Through a grant from Qatar Foundation, a further project is to convert carbon dioxide in the presence of sunlight into natural gas. Related research is to produce natural gas from agricultural or kitchen waste, which, as Allam notes, in a country with 88 million people and counting, there is not a shortage of.

However, Allam is facing obstacles in his research. While facilities have improved, with Zewail’s clean room being utilized by Egyptian researchers, they pale in comparison to those elsewhere in the globally burgeoning nanotech field. MIT’s lab for instance supports 2,000 researchers, while other institutions have clean rooms of over 1,000 sq.m, several times larger than Zewail’s and 20 times larger than AUC’s.
“For Egypt the huge problem is funding, and secondly, there are no companies to supply us with chemicals or the small factories to make specialized items,” said Allam. “It may take eight months for a delivery, during which time someone else may have published (relating to my research). When I am at MIT, if I order in the morning it is on my desk that day.”
Despite such challenges, cutting-edge research is underway in Egypt. Dr Wael Mamdouh, assistant professor at the Nanotechnology Graduate Program at AUC, specializes in molecular systems at the nano scale. After groundbreaking work and numerous publications at European institutions, he returned to Cairo to shift the scope of his research in line with the needs of applied science in Egypt and the region. One such area is bacterial infections, a particularly common problem at local healthcare facilities.
To develop affordable solutions, Mamdouh and his team – including undergraduates – are researching natural properties for use in nano-fibers for dressings, such as the insulin in honey, herbs and shrimps. “We are investigating how to design novel techniques from these materials and analyze their properties to come up with prototypes that could solve some bio-medical problems with cancer, especially breast cancer, and bacterial infections,” said Mamdouh. “It is really promising to transfer material to nano materials as the properties change significantly.” Broken down at the nano level, the compounds from these natural extracts create a synergistic effect. “It is amazing to see. Insulin has no anti-bacterial products, but at the nano scale it does,” he said.
One student already has a provisional US patent relating to the electro-spinning of polysaccharide nano fibers, and others filed this year for anti-bacterial coatings and wound dressings. Through an electro-spinner, the anti-bacterial properties in the nano-fiber increase tremendously, making it close to an antibiotic. “It is the first time in Egypt, maybe even in the region, that an undergraduate is developing anti-bacterial coatings and wound dressings by electro-spinning,” said Mamdouh. 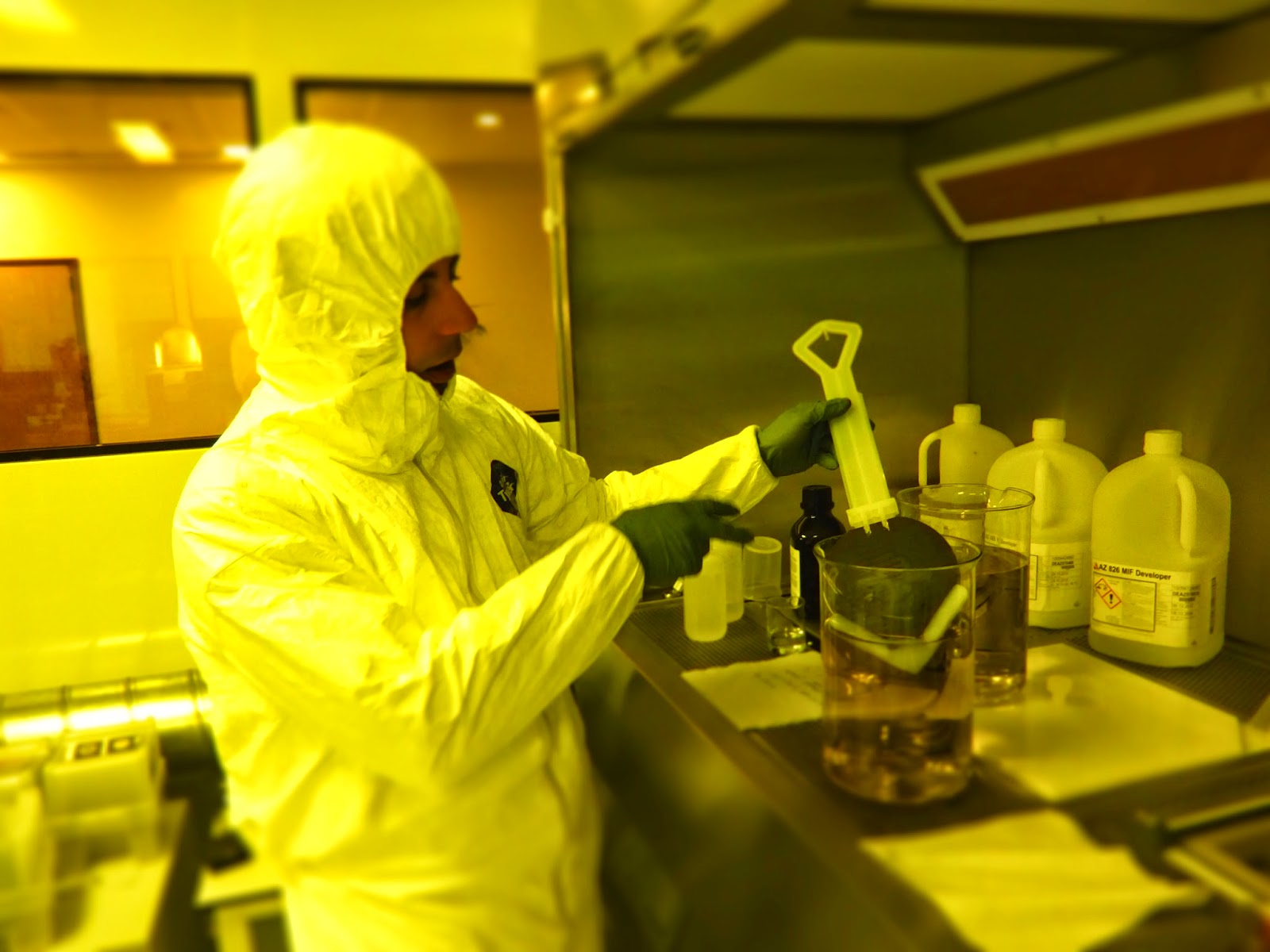 The uses of nano particles in biomedical research extends from the external to the internal. Dr Mohamed Swillam, assistant professor of physics at AUC, is focused on nano-photonics or optics. This is a new field in physics, at the nano-scale, that integrates nanotechnology with light. In previous research, for which Swillam won the Best Publication in Physical Science award from Misr El-Kheir Foundation in 2013, he proposed an ultrafast method to control and manipulate a laser beam on a nanoscale. His research has application in nanolithography, whereby tiny electronic devices control and manipulate nanoparticles to deliver drugs within the human body. “It can move a drug from one location to the other using light, like a nano-optical tweezer,” he said.

Far removed from the human body, Dr Hanadi Salem, Professor in Materials Science and Director of the Nanotechnology Program at AUC, is researching severe plastic deformations to take bulk materials and reduce them to the nano level. One project involving applied nanotech is to produce components of superior mechanical properties and with optimum resistance, such as self-lubricating solids and high-wear resistance materials. Such development can be used to produce gears for machines with high wear resistance, and carbon nanotubes for metal-based break pads for vehicles. Last year, Salem’s team tested a self-lubricating solid in Germany that they had produced. “We had excellent performance, with very low wear rates. It has the capability to be commercialized,” she said.
A further area under research is thermomechanical treatment associated with intense plastic deformation related to steel rebar – the steel rods commonly used to reinforce concrete in buildings. By restructuring low carbon steel it produces equal strength and toughness as conventional steel but at a lower cost and with similar properties. Salem and students have managed to refine the structure from two microns to one micron using thermo-mechanical treatment. The second stage is to take it to the nano-scale, for which Salem has applied for grants and is seeking collaboration with the steel industry.