The airstrikes against the IS will have minimal effect. As with other militant Islamist groups, cut off the head and two more grow back, unless the core issues are addressed that give rise to such extremist movements in the first place. This US-led coalition will not do this, but will instead fuel further militancy. 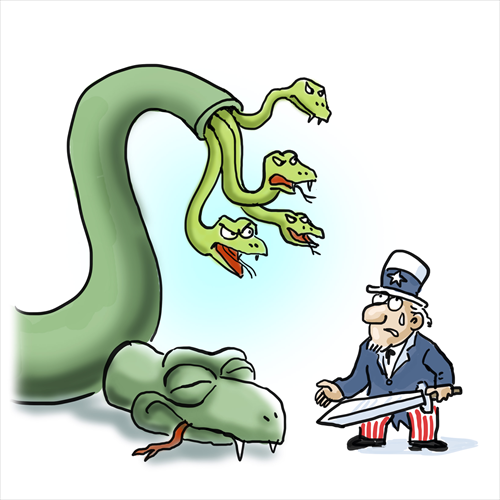 It has been several weeks since the US started airstrikes against the Islamic State (IS) in Iraq, with the operation recently expanding into northeastern Syria, the militant group's stronghold. While Washington has been quick to call the strikes a "success," facts on the ground tell another story.

The IS has adapted to and is rebounding from the coalition attacks. This has been noted by the Pentagon, with Lieutenant General William Mayville Jr. saying exactly that following the first raid on Syria, "They will adapt to what we've done [...] We have seen evidence that they have already done that."

While the IS is taking causalities and facing setbacks, such losses are being countered following a surge in recruitment since the attacks were launched, with more than 6,000 new fighters joining, of which 1,300 are allegedly foreign fighters, according to the Syrian Observatory for Human Rights. Such factors indicate the fight against the IS will be a drawn-out affair.

Not since the Mujahideen fought against the Soviets in Afghanistan in the 1980s, has there been such a well organized, well funded, and well armed campaign by a Sunni Islamic militant group.

The IS has had years to build up to a strength that enabled it to seize control of swathes of northern Syria and northern Iraq.

Its ranks are made up of seasoned fighters that earned their laurels in Chechnya fighting the Russians, in Afghanistan against NATO, and in Iraq fighting the US forces from 2003 until 2011.

Their operational expertise is bolstered by former Iraqi and Syrian army officers, intelligence officers and former policemen, and their governing capacity by former accountants and surgeons. It is a movement that should have been nipped in the bud early on before developing into a multinational menace, but was instead allowed to flourish by nearly every actor in the Middle East today.

Turkey opened its borders to allow militants to flow into Syria to overthrow the government of Bashar Assad; training and arms were provided to rebel movements by US and European special forces; Islamist rebels were financed by donors in Saudi Arabia, Qatar and Kuwait; and the Syrian government itself released several hundred Islamists from prison - many of whom had fought the Americans in Iraq - to weaken the rebels by turning the conflict into a national struggle against Islamic extremism.*

The IS is therefore very much a demon born from the Middle East's protracted problems and decades of failed policy decisions.

It is also what is feeding the IS' popularity among Jihadists, being a group that is challenging the established order, with its successes touted on social media.

Countering the IS is going to take more than bombs. It is about countering the ideology of the IS, which is to establish a caliphate based on Sharia law.

A major problem here is that the US-led coalition is made up of the very states that have promoted and funded such an ideology for the past 50 years.

The Kingdom of Saudi Arabia and Qatar are both Wahhabi, an extreme form of Islam that came out of Saudi Arabia in the 18th century, which petrodollars enabled to be exported globally.

From being on the periphery of the Middle East, militant Islamism has gradually moved to Iraq and Syria, and is now getting close to the center of Islam itself, Mecca and Medina.

That is what is causing concern among the Saudi elite, which had previously exported their Islamist "bad boys," only to find them back in the Saudi backyard trying to set up the type of state idealized by Saudi Arabia's fundamentalist theology.

Indeed, while the IS' highly publicized beheadings deserve to be denounced, the kingdom itself has beheaded 41 people so far this year.

The airstrikes against the IS will have minimal effect. As with other militant Islamist groups, cut off the head and two more grow back, unless the core issues are addressed that give rise to such extremist movements in the first place. This US-led coalition will not do this, but will instead fuel further militancy.


* Addition made to published text.
Posted by Paul Cochrane at 11:51 AM

"Back in Beirut" has been included in our Sites To See #400. Be assured that we hope this helps to point many new visitors in your direction.