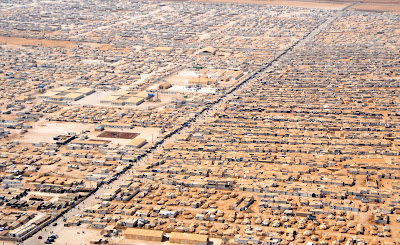 Zaatari Refugee Camp. ‘Bluntly, demand for pharmaceuticals did not reflect the 15% rise in the population. Refugees are buying in small quantities, and only the essentials,’ said Mohammad Shahin, Chairman of JAPM.

By Paul Cochrane in Amman

Jordan may be small in population terms, but it packs a hefty punch in the Middle East pharma manufacturing sector

With a population of just 6.6 million, Jordan may be a small country but it is one of the largest pharma manufacturers in the Middle East. A key reason for this is that production is export focused, particularly in the generics sector.

The country’s manufacturing sector, with an annual turnover of US$500m, had been steadily growing at 8–10% per year until 2012, according to the Jordanian Association of Pharmaceutical Manufacturers and Medical Appliances (JAPM). But since the ‘Arab Spring' of 2011, exports have slowed due to instability in the region, notably the conflict in neighbouring Syria.

Development is also being hindered because Jordan, unlike some of its regional competitors, notably Iraq and Iran, abides by the World Trade Organisation (WTO) Agreement on Trade-Related Aspects of Intellectual Property Rights (TRIPS) and data exclusivity. Since becoming a member of the WTO in 2000 and signing a free trade agreement with the USA in the same year, Jordanian companies have not developed any significant new medicines.

That said, Jordan’s domestic pharma market is growing. According to UK- based BMI Research, the total market, including imports, reached Jordanian Dinars JOD643m ($905m) in 2014, and is forecast to grow by 6.4% in 2015, to JOD683m ($962m). Samer Al-Ansari, Marketing Director for the Middle East and North Africa (MENA) at Hikma, one of the region’s leading pharma manufacturers and exporters, established in Jordan and listed on the London Stock Exchange, says the total market grew by 9.4% in 2014, while according to BMI generic growth was 10.5%.

Driving sales is burgeoning population growth, at 4.2%, further boosted by the influx of Syrian refugees: 937,830 were registered as of 2015, according to the United Nations High Commission for Refugees (UNHCR). Demand comes from the UN and other agencies supporting the refugees, and the market’s value is increasing due to the entry of patented products with high prices as well as an increase in generics, said Al-Ansari.

However, aid agencies import medicines and individual refugees have low purchasing power. ‘Bluntly, demand for pharmaceuticals did not reflect the 15% rise in the population. Refugees are buying in small quantities, and only the essentials,’ said Mohammad Shahin, CEO of the Jordan Sweden Medical and Sterilisation Company (JOSWE), and Chairman of JAPM.

The Jordanian healthcare sector is heavily supported by the government, with the ministry of health providing insurance to 40% of the population, followed by state health services organisation Royal Medical Services (RMS) covering 27.5%, according to the Jordan Journal of Pharmaceutical Sciences (JJPS). Government healthcare spending is on the rise, projected to go from JOD1.86bn ($2.62bn) in 2014, to JOD1.97bn ($2.78bn) in 2015, a 6.2% increase, according to BMI Research.

In 2016, compulsory health insurance is scheduled to be introduced to cover all Jordanians. If such a move happens, it is expected to be a boost for pharmaceutical sales. ‘The goal is to have local insurance companies support the private sector, but so far it has been only discussions, nothing has been agreed on yet. But you see that Jordan is moving towards the privatisation of healthcare, and wants to boost medical tourism,’ said Al-Ansari.

Jordan has 16 pharmaceutical firms, which manufacture mostly generics or branded generics, bulk antibiotics and cancer-related treatments. The market is dominated by Hikma, followed by Dar Al Dawa, Arab Pharmaceutical Manufacturing, JOSWE, Pharma International and United Pharmaceutical Manufacturing. ‘Local companies supply around 20% of total domestic consumption, and the rest is imported,’ said Shahin. More than 70% of Jordanian pharma production is for export, to more than 65 countries, primarily in the Middle East, Africa and Asia.

Regional instability has had a negative impact on exports, affecting the country’s overall economy, which is expected to grow by just 2.5% in 2015, according to the International Monetary Fund. ‘Our export markets are challenged to Iraq, Syria, Egypt and Saudi Arabia, as well as to Yemen and Sudan. You can anticipate issues in one or two countries but not four surrounding countries all having problems,’ said Hana Uraidi, CEO of the Jordan Enterprise Development Corporation (JEDCO).

Financing has also been complicated by the instability, while credit lines are under pressure. ‘It’s hard to get extended credit lines as insurance companies are seeing Jordan as higher risk, so traders have to pay up front, and we have a cash problem. If we take out loans it affects overall costs and profits. Before, we thought the situation would calm down after two or three years, but the government is now forecasting problems for 10 years,’ she added.

The closure of the Syrian border has hit the pharmaceutical sector particularly hard, as it was a major transit route for exports to Lebanon, and on to Turkey and northern Iraq, while the western Iraqi border has also been closed due to the presence of Islamic State. Companies are managing, however, to export to Kurdish Iraq and Baghdad, avoiding areas controlled by IS, while the central Iraqi government is still delivering drugs.

‘Overall exports are down by around 10–15% on 2014. It is not only neighbouring countries that have affected us, the whole region is affected, and in certain countries it is not clear who is in control. Payments are another problem,’ said Shahin. JOSWE expects a drop of 10% in its sales this year, with its business evenly split between local sales and exports.

Syria was not an export market for Jordanian manufacturers prior to the conflict as the country was practically self-sufficient in pharmaceutical production. But although the Syrian sector has been ravaged by war it has started exporting to the Arab Gulf and north Africa, according to Shahin, which has detracted from Jordan’s export competitiveness due to low prices.

Looking ahead, it may be generics that really underpin the Jordanian pharma sector’s success. WTO membership and its US trade deal have forced the country’s pharma sector to be transparent about producing generics and original research is still at an emerging stage due to a lack of investment, according to a 2015 article in the JJPS. The Jordanian Scientific Research Support Fund inked four agreements with public and private universities to develop pharmaceutical and medical research projects, worth $479,660 in September 2015, but it is not expected to cause any major upturn in the overall sector given the large investments elsewhere in the world.

‘We had hoped when we signed the WTO and IPR agreements that there would be a transfer of technology and know-how from multinationals to the local industry, but it’s been an unfulfilled promise,’ said Shahin.

Currently, local producers engage in contract manufacturing for global majors, which contributes to less than 5% of the sector’s overall revenue, according to the JJPS. The rest of production is generics under licence, with most licensing agreements still in effect signed before 1999.

Due to data exclusivity and a lack of diversification, there is heightened competition among manufacturers, while JAPM estimates that few companies are operating at more than 40% of installed capacity. ‘Pharmaceutical companies are all making the same product, and each product has 15 or 20 competitors, while some have 50 or even 100 if we include imports as well,’ said Shahin. Such products include second-, third- and fourth-generation generics. To bolster business, JOSWE has started producing generics not in the market, but few others have followed the same route.

‘JAPM is trying to advise companies not to add more similar generic products but to create variety and products not in the market,’ added Shahin. The overcrowded generics market has led to a domestic price war, with companies trying to sell the same generics at a price 20% lower than the originator drug.
Companies are also having to make their generic products known in the market. ‘In the EU or the US you can sell a generic by its scientific name, but in the Middle East and North Africa (MENA) it is branded generics, so you have to build up a brand name,’ said Al- Ansari.

The fact that the writ of TRIPS does not run across Jordan’s region is a problem: ‘You find firms in such countries registering more products than us as they are not as strict in protecting IPR agreements,’ said Shahin. Egypt, for instance, has no TRIPS-Plus provisions, mandating more data exclusivity in its IPR law, yet it has had more foreign investment in its pharma industry, boosting competition for Jordan.

Meanwhile, exports to Africa have been affected, added Shahin, by changing rules and prices in certain markets, as well as the need to compete with cheaper imports from India and the Far East.

To bolster sales and enter more stable markets, Jordanian pharmaceutical companies are preparing for EU accreditation. Hikma is already in the EU market, but it is easier for US products with Food & Drug Administration (FDA) approval to enter than Jordanian products, said Al-Ansari.

But while its MENA business has been affected by the regional unrest, Hikma has continued to expand its portfolio globally. In 2014, it acquired the US’s Bedford Laboratories, and in 2015 bought the US’s Roxane Laboratories Inc and Boehringer Ingelheim Roxane Inc. Last September, the company acquired Egypt’s EIMC United Pharmaceuticals.

Hikma’s generics business, which sells non-injectable products in the US market, generated revenue of $216m and accounted for approximately 15% of group revenue. ‘If there is potential and a need we’ll bring some products (from the newly acquired companies) from the US to Jordan,’ said Al-Ansari.

The article is quite attractive and informative.And We Narwhal Data Partners Provide Wide Range Of Updated Pharmaceutical email lists . Healthcare Industry or Medical Industry is one of the world's largest and fastest-growing market opportunities for disruptive innovators to create transformational businesses.Not all vendors provide you with the obsolete and unverified email list. We are the leading database vendor and pioneer suppliers of email database for any domain in any industry that you opt for. We provide you with a result-oriented and customer-centric email list which enables you to make a quick sale which increases your online and offline revenue.
Narwhal Data Partners creates various types of email database according to the client requirements with uncompromised quality which is the most needful tool for your business campaigns. We are mainly dealing in the email databases that are related to Information Technology and Healthcare industries for any city, state, and country.

Awesome blog. I enjoyed reading your articles. This is truly a great read for me. I have bookmarked it and I am looking forward to reading new articles. Keep up the good work!
Disinfectant supplier in india
Disinfectant manufacturer in india