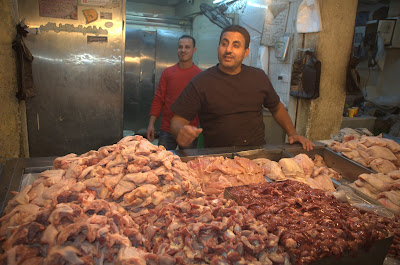 THE DEMAND for meat in Jordan has been weakened by the conflict in its troubled neighbour Syria, with the Jordanian economy slowing down due to regional instability, impacting consumer purchasing power. However, at the same time, demand for meat is being bolstered by Syrian refugees.
A country of 6.6 million people, Jordan is currently hosting 937,830 Syrian refugees, according to the United Nations High Commissioner for Refugees (UNHCR), with 80% living outside of refugee camps. The influx of Syrians has boosted meat imports, mirroring the impact of an influx of Iraqi refugees following the US-led invasion in 2003.
“At a food level it has been a plus as increased imports of meat, like when the Iraqis came from 2003 onwards. But there are psychological differences. The Iraqis had money but the Syrians less so, and are more conservative in spending,” said Ali Noor, general manager of Kaylani Food Centre, a meat distributor in Amman, Jordan’s capital.
Until 2014, food was provided to refugees by the UN and aid agencies, in addition to handouts from wealthy Gulf Arab donors, purchased either via international tenders or local retailers. Over the past year, however, food vouchers have been provided to 538,274 refugees, according to the UNHCR, to buy whatever food they need: “Syrians go to the supermarket, to Carrefour, with coupons for rice, sugar, oil and sometimes meat,” said Noor.

Market Instability
However, regional instability has seriously impacted Jordan's economy by warding off tourists and foreign investment. Economic growth is forecast at just 2.8% this year, according to the World Bank.
“For commercial products – beef and lamb – you see demand going up and down. Is it a reflection of the crisis? Possibly, but I can't put my finger on it and say for certain,” said Noor.
The crisis has also affected trade that had previously transited through Syria to and from Turkey and Europe. “Meat imports from Turkey are taking up to 21 days instead of a week, due to having to ship to Aqaba port (in southern Jordan),” said Ahmad Al-Hamad, Kaylani's commercial manager.
But while logistical costs have risen, the domestic market has been bolstered by the closure of the border with Syria. “People used to buy in Syria as it was 2 Jordanian Dinar (USD2.80) for a kilo of lamb compared to 10 JD (USD14) in Jordan. There was price gouging with people taking advantage (of the price difference), but the government has stopped this,” said Noor.

Fear of Disease
However, despite Jordan's borders being better monitored by the authorities and restricting meat trades, there is a high risk of disease due to smuggled livestock from both Syria and Iraq. “The threat of transboundary animal disease has increased,” said Markos Tibbo, livestock officer at the UN's Food & Agriculture Organisation (FAO) for the Near East and North Africa. “I think the vaccination coverage in Jordan is not up to the recommended standard as their capacity and resources are limited in undertaking disease surveillance and control.” He noted: “We've helped Lebanon vaccinate the entire livestock population via a USD5.6 million programme from the UK's Department of International Development (DFID), implemented in 2014-15. We want to repeat this in Jordan, as well as to protect the livestock assets of the poor.”
Posted by Paul Cochrane at 11:19 AM

We found this weblog very great and we wanna thank you for that. We hope you keep up the great work!
Construction Companies In Lebanon