Support in a Time of Peril: Nurses and Syrian Refugees

Nurses helping people affected by the civil unrest in Syria do what they can with limited resources, writes Paul Cochrane for Nursing Standard Journal 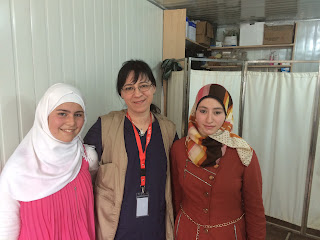 In the fifth year of the civil war in Syria, nurses working for more than 200 agencies and aid groups in the region are providing paid and unpaid assistance. In 2014, the United Nation’s Syria Humanitarian Assistance Response Plan dispensed 16.5 million medical treatments in Syria. In Turkey, 522,000 people received health assistance in September 2014 alone.
The plan has also provided 3.6 million primary healthcare consultations for Syrians, and trained 4,343 health workers. According to the International Labour Organisation, 75% of Syrian refugees are struggling to meet their food needs or pay for medical care. This is where aid agencies step in.
In neighbouring Lebanon, senior nurse Norma Kebbe works for the international Catholic charity Caritas’ Saint Michel Medical Centre in the Beirut suburb of Sid El Bauchrieh. The clinic sees more than 80 families every day.
‘It is busy because our services are free of charge,’ Ms Kebbe says. The clinic has two doctors, a nurse and an occasional volunteer Syrian nurse. Ms Kebbe, who has 17 years’ nursing experience, decided to leave her public hospital job and take a 20% salary cut to work for Caritas because the clinic’s daytime hours suit her. The clinic cares for Syrian refugees, Iraqi refugees and low-income Lebanese people. 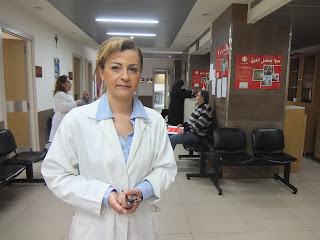 Ms. Kebbe at the Caritas Clinic

Over the past two years Ms Kebbe has noticed a marked improvement in refugees’ health. ‘When we started the clinic, refugees were in a bad situation medically and psychologically. After a year, people with hypertension are improved, there are fewer skin infections and follow up is better,’ she says.
Patients are also referred to social workers and psychologists. ‘All the refugees are traumatised and stressed,’ says Ms Kebbe.
Lebanon has no refugee camps but Jordan does – although about 84% of refugees live outside camps. Minimal care is provided by the Jordanian government. The largest camp, Zaatari, with 83,796 refugees, is near Jordan’s capital Amman. Nurse Sylvie, who does not want to give her full name, is from New York and volunteered with the Syrian American Medical Society for a n week in March.
‘It was a shock,’ she says. Conditions at Zaatari’s healthcare facilities were basic and patients’ health issues were related to poor living conditions, trauma and prior medical conditions.
‘Burns from gas stoves were prevalent among women and children. I did a lot of dressings with almost nothing to work with and it was impossible to wash hands between patients.’
Despite the difficult conditions, Sylvie plans to volunteer again: ‘I should be in Jordan doing something useful.’