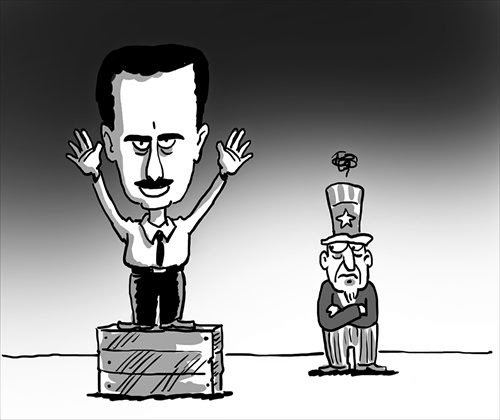 
There were huge traffic jams in and around Beirut recently as tens of thousands of Syrians went to their embassy to vote in the presidential elections.

Such a turnout, with the elections extended for an extra day, confounded many observers, particularly in the anti-Syrian regime camp. How could people vote for a president, Bashar al-Assad, during a conflict that has killed over 160,000 people, and a man that has ruled Syria since 2000, and his father before him since 1971?

People must have been intimidated and forced to do so, fearing for their lives if they did not vote, went some accusations in the press. Others stated that people were paid to turn up.

That an estimated 10 million Syrians voted in Lebanon, Jordan and Syria appeared antithetical to the anti-Assad narrative in the mainstream media since the uprising started in 2011; the narrative that Syrians were overwhelmingly against dictatorship and were fighting for freedom and democracy.

As is so often the case, such observation and analysis overlooks the fact that the price of achieving such goals comes at a high cost for people and the country. Stability and security are preferable to chaos.

Indeed, Syrians had looked on with horror at what happened in Iraq following the US-led invasion in 2003, and how the country splintered apart amid brutal sectarian warfare and terrorist attacks.

Syrians also looked at neighboring Lebanon, from which Syria withdrew in 2005 after a 29-year military presence, and did not want the Lebanese-style "democracy" of corrupt political dynasties and sectarian parties either.

The Assad government naturally capitalized on such sentiments and made it part of their narrative of the conflict, that terrorist insurgents, primarily Sunni extremists, were bent on destroying the country and were aided externally by the Persian Gulf states of Saudi Arabia, Qatar and Kuwait, alongside the West. It is a narrative that has clearly worked, with 88.7 percent of people voting for Assad and a 73.4 percent voter turnout.

That the election was not overly transparent, that millions were not able to vote in or outside of the country - such as in opposition-held areas - and that no members of the opposition itself were on the ballot naturally raises questions about its credibility. Yet at the same time, those criticizing the Syrian elections as a farce were not as quick to say the same about Egypt's presidential elections that happened at the same time, with Abdel Fattah al-Sisi getting 96.7 percent of the vote while only 47.5 percent reportedly voted.

Indeed, in Egypt, voting was extended for an extra day not because of overwhelming turnout, but because not enough people had voted. But Egypt is pro-West and pro-Gulf whereas Syria is not, so the narrative has to be different.

Yet this is not to imply that there is no strong opposition to Assad. There is, whether from Islamic groups or others, while many Syrians do not feel represented by the divided opposition itself.

Syrians did protest against the "blood elections." A recent poll by the Arab Center for Research and Policy Studies found that 78 percent of Syrian respondents inside and outside of refugee camps viewed the presidential elections as illegitimate, and 64 percent held the opinion that the ideal solution to the crisis would be through a change in the current regime.

So what next, now that Assad is in for a third term as president? The regime has clearly been given a popularity boost from the public, and will go on to try to cement that position. Damascus has political and military support from Iran, and at the international level from Russia and China.

Getting to that stage will be the big challenge. In the meantime, the conflict is set to get even more polarized. Government forces will try to retake opposition controlled areas, primarily in the north and east.

Conversely, there is a renewed push by the rebels from the southern front in Jordan with the backing of US, British and Gulf intelligence agencies, and also from the Turkish border, with the aforementioned agencies along with the Turks meeting in late May to shift the balance of power in favor of the rebels. US President Barack Obama has called on Congress for a $5 billion Counterterrorism Partnership Fund "to train, build capacity, and facilitate partner countries on the front lines," which includes the Syria conflict.

The US and Europe have made it clear that Assad has to go, and have denounced the election. The scene is set for the three-year-old conflict to rage on, eerily reminiscent of the situation in Iraq a decade after the overthrow of Saddam Hussein.
Posted by Paul Cochrane at 11:54 AM