US can ditch chemical weapons too 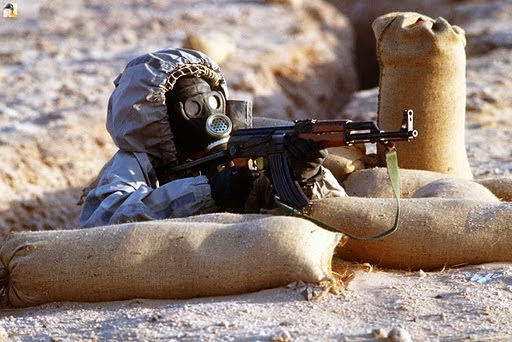 Over the past year there has been a lot of hand-wringing about Syria's chemical weapons, as to whether the weapons were used by the regime or the rebels in the conflict. Allegations reached a peak last summer over one particular incident, when the US said a "red line" had been crossed in Syria and there was a strong possibility of a US-led military intervention.
At the last hour, Russia pushed through a compromise, that Syria would willingly hand over its chemical weapons to the Organization for the Prohibition of Chemical Weapons (OPCW) for destruction. Military intervention was called off. A self-imposed deadline by Syria to hand over all chemical weapons was set for April 27 this year, and the weapons to be destroyed by June 30.
As of April 22, 86.5 percent of weapons had been handed over. By April 24, 92.5 percent had been relinquished, according to the OPCW. This is extraordinary progress considering the obstacles faced, including extracting and transporting the weapons in the mid of a conflict, and getting them to US navy vessel Cape Ray to be taken from Syrian shores for destruction.
Indicative of the complexities is that, according to an AFP report, the last chemical weapon stockpile is near the Syrian capital but cannot be accessed for security reasons. It is no surprise then that Damascus did not meet April 27's deadline, which is a concern, but it was perhaps wishful thinking for the deadline to be met in a relatively short time frame.
Moreover, with the removal of chemical stockpiles still underway, it gives Damascus more time to stave off international pressure, particularly as UN Security Council members are calling for a new investigation into alleged gas attacks.
Yet while recriminations and fingers are being pointed at Damascus for having missed the deadline, Syria's actions since last summer are worthy of emulation.
Indeed, the removal of the chemical weapons is one of the few positive developments since the conflict started in 2011.The removal of weapons in trying circumstances is a further positive sign, and one that should send a signal to other countries possessing chemical weapons to get rid of them too.

Syria's example means there is no excuse for Angola, Egypt, Israel, Myanmar, North Korea and South Sudan not to sign up to the 1993 Chemical Weapons Convention (CWC).
More crucially, given the US wagging its finger at Syria over chemical weapons, and Russia having suggested disarmament in the first place, the two countries should re-bolster their efforts to eradicate their own stockpiles.
The US in particular sounds hypocritical when it forces Syria to disarm, and given the sordid saga of Iraq's alleged weapons of mass destruction that provided the casus belli for the US invasion of Iraq in 2003.
Furthermore, Iraq signed the CWC in 2009, and has a supply of chemical weapons from before the 1991 Gulf War, yet the US did not destroy these caches when occupying the country, or in the years since.
The big issue is that under the CWC, participating countries were given a decade to destroy stockpiles, with the possibility of a five year extension. By 2007, five countries had missed the deadline: the US, Russia, South Korea, India and Albania. In the years since, South Korea, Albania and India have lived up to their obligations.
While 58,528 metric tons (MT), or 80.69 percent, of the world's declared stockpile of 72,531 MT of chemical agents have been destroyed, according to the OPCW, Russia and the US missed a second deadline, the supposed final one, in 2012. To date, Russia still has some 15,000 MT (38 percent of former stockpiles), and the US has some 2,800 MT (10 percent).
Russia is slated to have destroyed its stockpile by 2015, although there are doubts this will happen before 2020. The US on the other hand is only likely to have destroyed its weapons by late 2023 - 26 years after the first deadline – and having spent $20 billion so far on the destruction process, and a further $40 billion to have been spent by 2023.
The real issue here is that the USA in particular is in danger of renegading on the CWC, which states that “in no case” may the final deadline for destruction exceed 15 years.
We are approaching 100 years since chlorine gas was first used in modern warfare, in 1915, which left over 90,000 dead and 1 million injured. This should give further impetus to eradicating such horrific weapons.

Posted by Paul Cochrane at 8:54 AM

Thanks for this. I really like what you've posted here and wish you the best of luck with this blog and thanks for sharing. Online Slot Games Singapore