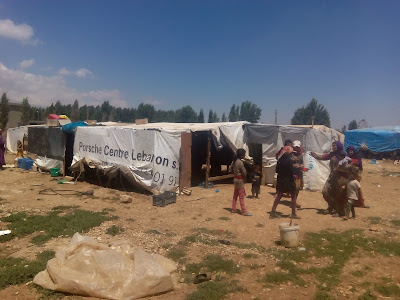 An informal refugee camp in the Bekaa Valley, Lebanon


There is a massive debate raging in Europe and the US as to what should be done about the Mediterranean refugee crisis. How many should be let in? What is our moral responsibility?

Largely absent from these discussions is the role of certain European states and the US in triggering the refugee crisis in the first place.

It was not Greece, whose beaches and borders are inundated with refugees, or other countries along the South-Eastern Mediterranean. Nor Lebanon, which has a staggering 1.2 million registered refugees, or Iraq or Jordan. Turkey is another matter, but all four of these Middle Eastern countries have taken in the bulk of 4 million Syrian refugees.

All the neighboring countries of Syria are reeling from the strain of such an influx, particularly Lebanon, which has taken in the equivalent of a quarter of its population in the last four years. Yet Europeans are complaining about collectively taking in 350,000 refugees: try over a million in one country and see what happens on the social and economic level.

Ironically, the countries that have taken in the most Syrian refugees on a per capita basis were not involved in any recent military adventurism in the Middle East.

The countries that beat the drums of war for the invasion of Iraq in 2003 have not been as welcoming, despite causing the deaths of over 1 million Iraqis and displacing 1.9 million people.

Initially, the US took in only a handful of refugees, and under pressure increased the number, since 2007 taking in 105,000 Iraqi refugees.

Britain was also not very refugee-friendly, despite London's role in pushing for the war. When it comes to Syrian refugees, the US has taken in just 1,243 since 2011.

This year, the US has pledged to take in a further 33,000. That figure should be seriously increased.

The Iraq war ties in with the Syrian refugee crisis, as does the NATO decision in 2011 to bomb Libya. The Iraq war provided the catalyst for the rise of the Islamic State, which did not exist prior to the West's "humanitarian intervention."

Libya's shoreline, which is being utilized primarily by African refugees to cross the sea, was not a launch pad prior to the overthrow of Muammar Gaddafi. Neither was Syria a source of refugees prior to the conflict in 2011.

Certainly such dictatorships should not be excused any blame since their clinging onto power at all costs has proved devastating, but it is the public, in particular women and children, that are bearing the brunt of conflict. Furthermore, the conflicts have negatively impacted economies around the region, adding further impetus for people to leave.

No wars, no refugees. It is essentially that simple. Indeed, the EU estimates that two out of every three migrants come from conflict areas. This is only likely to increase as Britain, France and the US up their military involvement in Syria.

The advocates of humanitarian intervention will argue that a new democratic state cannot emerge without a difficult "transition period," but is war the right way to make such a change happen?

A broken country that is not able to rebuild, like Iraq, Libya or Afghanistan, without the equivalent of a Marshall Plan that rebuilt postwar Europe, is not going to succeed.

Instead, we have hand-wringing about what to do with refugees.

Blame for the Mediterranean refugee crisis should also lie with the key regional US allies like the Gulf states, which have so far not taken one Syrian refugee despite their counter-revolutionary role in the Middle East, especially in Syria but also Libya and Egypt.

There needs to be a global debate about the refugee crisis, and the role of those countries most responsible should not be overlooked.

That said, supporters of the Assad regime should also be involved in taking in refugees, as they too hold culpability for the deaths of 240,000 Syrians and the displacement of 9 million people.