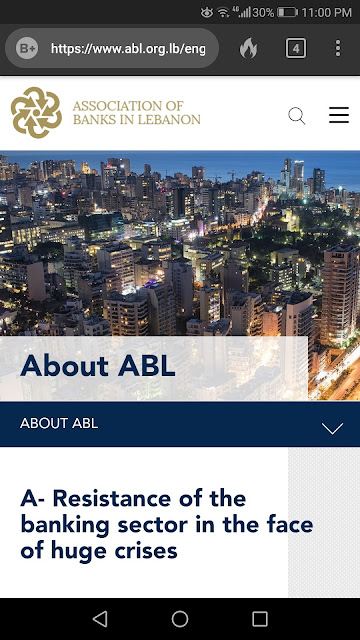 Lebanon’s banks were closed for two weeks due to the mass protests throughout the country. The banks opened last Friday (1 November). There was the expectation of a run on the banks and massive capital flight as Lebanese, expatriate Lebanese and foreigners withdrew their cash. It didn’t happen, but it doesn’t mean that all is well despite the repeated assurances of the banks, the Central Bank, and the Association of Banks in Lebanon. The banks are playing fast and loose with the realities on the ground.

Bank Audi, the largest bank in the country, tried to reassure investors in its weekly report: “Lebanese banks succeeded on Friday the stress test, as they ensured their customers’ needs firmly and promptly. This is also attributed to people’s awareness and sense of responsibility in addition to the high level of cooperation between banks’ employees and clients. This has helped sweep away all fears and rumors that reigned over markets shortly before banks re-opened their doors. In fact, banks’ clients became more aware about Lebanon’s capability to face challenges.”

There was minimal “awareness” or “responsibility” by the banks’ clients. Clients were not allowed to withdraw all their money, palmed off with being able to walk out of the bank with $2,000 to $3,000 a day. Neither were clients allowed to transfer significant amounts of money abroad. In fact, bank sources told me that if clients requested transfers, the bank would look more closely at a client’s accounts to see whether funds were being withdrawn abroad, and could put a stop to such activity (international transfers are not possible online). You can’t have a run on the bank if you can’t withdraw the money.

In fact, bank account holders outside of Lebanon are in a better position than those in Lebanon to withdraw funds in foreign currency, able to take out the maximum daily allowed ($500 to $1000 plus – although paying a transaction fee at the ATM and to the Lebanese bank).

Few, if any, Lebanese banks are allowing ATM withdrawals in US dollars, just in Lebanese Lira (Lebanon is one of the few countries in the world that allows withdrawals in greenbacks as well as the local currency). Lebanese want dollars as while officially the Lira is pegged to the US dollar at LL1,507, on the street the exchange rate is LL1,580, and hit LL1,850 in late October. Without dollars, you can’t import goods. That was a reason why the banks opened again as the protests simmered down. The country was reportedly days away from running out of wheat, fuel and other imported essentials.

The situation is unprecedented. Even during Lebanon’s 16 year civil war (1975-1990), the banks never closed for more than four or five days – militias had to be paid, after all. The joke was that Lebanese banks had survived everything except a nuclear bomb.

During the July 2006 war between Israel and Hizbullah, dollar withdrawals stopped, but the Lira peg stayed the same, in large part due to Saudi Arabia and Kuwait depositing $1.5 billion into the Central Bank to keep Lebanon afloat. Fast forward 13 years, and the Gulf countries have not been so ready to step in, although the UAE is hinting it might. Nonetheless, the situation today is very different.

The debt has spiraled out of control, at 151% to GDP (although some suggest this has been tinkered with as the statistics are produced by private banks, with the debt to GDP ratio much higher, having been 183% in 2006) with the banks holding the majority of the debt, and the economy flat-lining.

The country is between a rock and a hard place: the much needed $11.6 billion loan from the Cedre donor conference (see my Counterpunch article) is up in the air, in part because the conditionalities that come with the loans are austerity measures, the very ones the government tried to introduce that led to two weeks of protests and the resignation of the prime minister. Lebanese are being squeezed left, right and centre, with the cost of living rising while public amenities are floundering: powercuts, water shortages, and creaking infrastructure.

Corruption and elite capture siphoned off billions of dollars over the past few decades – “the top 1% richest adults receives approximately a quarter of the total national income placing Lebanon among the most unequal countries in the world,” according to researcher Lydia Assouad – while leaving the country a wreck. This is what has driven the protests, but the inability of the government to rectify the situation means the country is fiscally on a slippery downward slope, and the banking sector being hit is another nail in the coffin.

It was clear the situation was untenable before the protests occurred. In October 2019, banks started putting unofficial restrictions on foreign transfers. Earlier in the year, the banks also tried to prevent clients from transferring Lira deposits into US dollars, as since mid-2018 there there had been talk of the Lira being unpegged to the dollar and the debt being unsustainable, with the situation so serious that banks were offering 7.5% to 15% interest on the Lira, depending on how much was deposited. Interest on the dollar was 5% plus. Of course, you don’t get such high interest for nothing, it is due to instability. The problem in Lebanon was, as one ex-minister put it to me, “we keep approaching the edge of the cliff, but the cliff’s edge keeps moving.” Every time there was a scare the situation soon reverted back to seemingly normal. As a result, there was no major outflows of cash or Lebanese stuffing mattresses full of dollars and hoarding gold (although there has always been a fair amount of that; in less stable countries it is always wise to have a sizable stash of physical capital, a lesson I learned in July 2006).

The question now is whether the situation will return to normal, and if the banks will allow transfers and have plenty of dollars again. The banks are certainly doing their best to prevent outflows of cash, as the fundamentals indicate it will not be ‘business as usual’ any time soon. As Capital Economics noted in late October: “In the absence of an IMF deal, the uncertainty over the economic outlook would lead to a bout of capital flight. And the central bank has limited resources with which to mount a defence of the dollar peg. A messy devaluation and default could follow. The IMF estimates that the pound is overvalued by around 50% and that investors in Lebanese bonds could face losses of up to 75%. This would be enough to wipe out banks’ capital and result in severe strains in the financial system. Past experience shows that economies which have suffered debt, currency and banking crises simultaneously have, on average, contracted by 8% from peak to trough.” That is a pretty dire forecast, certainly dire enough to consider getting your cash out of Lebanon ASAP – if you can; Lebanon has also reportedly put restrictions on taking cash and bullion out of the country.

In the meantime, Lebanese bank account holders continue to go to ATMs to withdraw cash, and max out credit cards through spending as well as transferring abroad to digital bank accounts (gold dealers in Lebanon are only accepting dollars).

Yet if the situation does stabilize, and clients can actually withdraw funds, where do they transfer their cash? The financial system is very much skewered in favor of the wealthy countries. Digital bank Transferwise for instance, in line with US regulations, only allows dollar transfers from 15 countries into its US account: Europe, Australia and the UAE; Lebanon is not on the list. The same applies to Euros. Lebanese can also not easily open accounts abroad without residency or other legal requirements.

Yet Lebanese and Lebanese bank account holders need not worry if one is to believe the upbeat tone of the final paragraph of Bank Audi’s weekly report: “Lebanese banks have always proved their ability to overcome difficulties and meet customers’ needs firmly, while monetary authorities continued to defend the currency peg. On Friday, Lebanese banks have once again proved their readiness to meet customers’ needs, mainly due to the availability of FC [foreign currency] primary liquidity. This has helped the first working day to go smoothly, and spotted light on banks’ credibility and transparency in addition to their role in safeguarding depositors’ interests.”
Posted by Paul Cochrane at 6:04 PM 1 comment: