Qatar's World Cup blues: What happens if the tournament is revoked?

'Expect Amazing' is the slogan for the Qatar World Cup but if Doha loses the event, it could become 'Expect Embarrassment' 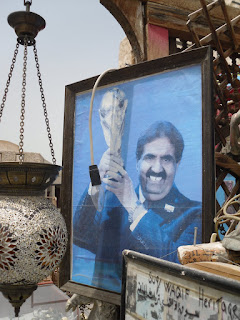 When Qatar won the bid in 2010 to host the FIFA World Cup 2022, petrodollars were widely considered to have influenced the vote. Allegations of bribery repeatedly surfaced, most damningly in France Football magazine's “Le QATARGATE” 20 page expose in 2013.

While not able to shake-off the accusations, Doha had a firm supporter in FIFA President Sepp Blatter, who enabled the controversial change of the event from summer to winter to better suit Qatar's sweltering climate.

Then in May, the Swiss authorities arrested members of FIFA for corruption. Would Blatter be next, and Qatar's champion pushed to the exit? The speculation was rife but the answer was - not yet. Blatter was re-elected 29 May and The Qatar Exchange (QE) - the country's stock market - reacted on the news once trading started on the Sunday, rallying by 1.23 percent.

Then Blatter resigned 2 June. The following day it was confirmed that the FBI as well as the Swiss attorney general were probing the 2018 and 2022 FIFA World Cup bidding process. The QE immediately dropped on the news (see below). 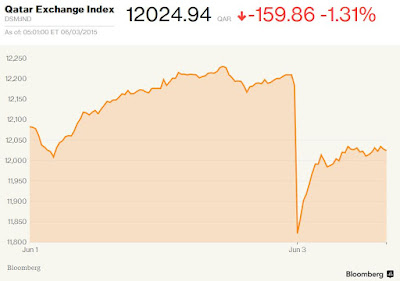 “The worry for Qatar has always been Blatter going, and that's now transpired,” said David Roberts, a lecturer in the Defence Studies Department of King’s College London and author of Qatar: Securing the Global Ambitions of a City State.

Media reports quickly emerged that property owners in Qatar would get burnt from the FIFA scandal, and that Doha was standing to lose $200 bn in infrastructure investment related to the tournament.

But would being stripped as the World Cup host be a serious economic loss for one of the world’s wealthiest countries?

“The only people buying in Qatar at the moment are Qataris and GCC citizens, so [its] basically a local market. Frankly, land prices are where they were back in 2010,” he said. Brookes also dismissed Bloomberg's claim that the $18 bn Lusail City development - which is expected to house 200,000 people - was for World Cup tourists.

According to Brookes, that project had been planned in 2003, years before the bid was secured in 2010.

As for the new infrastructure - the railway, the Doha metro, the port, and a network of roads - it is all part of the Qatar National Vision 2030 strategy announced in 2008.

“They are lumping the whole construction industry [together] in comparison to [focusing] on a global event,” said Steven Humphrey, director and head of the cost consultancy programme at AECOM, an engineering design and services firm, in Doha.

“The government departments we have contact with are still pushing on strategy, which is not to do with one event but [with] the National Vision, a bigger philosophy. Perhaps the only impact of the [bribery] rumours, if true, is [slower] time frames and relaxed deadlines, which would actually be a benefit.”
An estimated $4 bn, however, is specifically required for the championship and the construction or renovation of eight stadiums.

“A couple of stadium replacements will still go ahead, so I'd say if something happens in the next two months, [Qatar may] lose perhaps a few stadiums, but the rest will stay as required for existing football clubs,” said Humphrey.

But economic losses are not the only things in play. Losing the championship is expected to have an overly negative effect on Qatar's football culture. Some 65 percent of Qataris surveyed did not attend any matches during the 2013 football season, with 72.8 percent saying heat, humidity, wind and dust were factors for non-attendance. Half of all respondents also said that “annoying behaviour” by crowds was an obstacle to match attendance.

Where Qatar Inc. stands to lose the most if stripped of the event is its brand image, which the Gulf state has aggressively worked on, kick-started with Al Jazeera's broadcasting emergence in 1996, and Doha's foray into foreign policy and overseas investment.

“Doha made a lot of bets, and the bets seem to have come off over the last two decades, but [the country] lately seem to be losing time and again, in Libya, Egypt, and going into extra time with the world cup,” said Roberts, in relation to Qatar’s support for now ousted Egyptian President Mohamed Morsi and the Tripoli-based government in Libya.

While the country has wealth that is backed by huge hydrocarbon reserves, to weather any economic losses, if the FIFA corruption allegations are proven true, there would be a reduction in the confidence of international players and clubs to enter the game. Doha's ambitions to diversify its economy through becoming a financial hub to rival neighbouring Dubai would also likely be dented.

“The loss of the event would not be positive, as Doha has been struggling to create itself as an economic hub to match the Dubai International Finance Centre," said Elias Moubarak, head of finance at the law firm Trowers & Hamlins in the UAE.

“Bad publicity will not encourage people to move to the Qatar Financial Centre for example, and I think generally [have] a negative impact on Qatar's objectives.”

The biggest impact of losing the world's most watched sports event would be the knock to Qatar's reputation.

“First and foremost Qatar would see it as an embarrassing loss, and care about that far more than financial implications,” said Roberts. “They would be livid if [they] lost it, and I'm sure Qatar would try to sue FIFA - and anyone they can - back to the Stone Age, as probably hundreds of millions has been spent on public relations, consultancy, designs for stadiums.”

If proven, the bribes, alleged at several million, would be a minimal loss by comparison.

One potential consequence of Qatar losing the World Cup would be shifting away from its favoured investment destination, Britain, which accounts for around $57bn of the Qatar Investment Authority's estimated $170bn global asset spread.
“Domestically it will be a rally around the flag thing as anger will be 100 percent directed externally, especially towards Britain. Qataris are already a vast minority in their homeland and are increasingly resenting the number of foreigners in Qatar as well as the rough time that their state is getting in the Western press,” said Roberts.

“Additionally, there's an overt recognition Qatar is overly invested in London. I imagine this need to diversify would become more pronounced [if the games were scrapped] and [Qatar would] augment the relationship with East Asia countries.”

“Pouring further fuel on the fire to such Qatari sentiment has been England saying they are ‘ready to host’ the 2022 World Cup if asked,” he added.

A potential flip-side for Qatar losing the tournament would be the spotlight being turn off on labour rights issues and other muck-raking stories that Doha has exposed itself to in the lead up to the World Cup. Media coverage has focused on human rights abuses, while anti-logos, depicting slavery as part of a campaign to urge corporate sponsors to withdraw from the 2022 event, has been doing the rounds online.

“Qatar's brand image might be more dented if they actually host the cup through exposure of the exploitation of the labour force,” said Hannes Baumann, Leverhulme Research Fellow at King's College London.

“By comparison, the Bahrain Formula One has been an opportunity for progressive activism, and a risk for the regime.”

Such coverage and related Qatar-bashing would only heat up as the event approaches and the world's media descends on the peninsula.

“European taxi drivers now know where Qatar is on the map - due to the successful bid - but on the other hand [they also] know about labour deaths,” said Baumann. “If anything, that risk is even greater. People in the know might not have a high opinion of the Qatari regime necessarily, but at the popular level the branding really [could] backfire.”

Thanks very much for sharing these links. Will definitely check this out..
https://www.lcrenovation.co.uk/
House Renovations in Stockwell