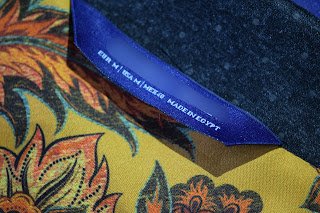 'Made in Egypt' - brands have left manufacturers in the lurch after cancelling orders (Paul Cochrane)
Middle East Eye: The Turkish and Egyptian garment manufacturing sectors employ millions of people, but big brands have left them in the lurch with cancelled orders and millions of completed items not dispatched in the wake of the coronavirus pandemic.

Towards the end of 2019, the Egyptian government and export associations hosted a sourcing event in Cairo, called Destination Africa, to bring together buyers from the West and manufacturers in Egypt and from around the continent.

Such trade events are held around the world at convention centres or high-end hotels, featuring gala dinners and spectacles to woo buyers, and seminars that discuss sustainability, modernising the supply chain and the future of the $2.7tn fashion industry.

After several rough years in the wake of the 2011 uprising, Egyptian manufacturers were keen to drum up business, increase the $3bn in garment and textile exports in 2019 and double the number of employees in the industry to two million by 2025.

Over in Turkey, the world’s fifth largest garment and textile exporter had hosted similar events throughout the year to tout its manufacturing prowess and increase its $26bn in exports.

Such outlays were paying off, with solid order books for 2020 and exports on the rise in the first few months of the year.

Turkey and Egypt were also riding high on buyers increasingly diversifying their sourcing from China due to the US-China trade war and wanting closer proximity to the European market.

Up until March, some one million Egyptian and 1.5 million Turkish workers were busy spinning, dying, cutting and sewing garments for the summer season, which accounts for around half of annual sales.

Then Covid-19 started to sweep across Europe and North America which, along with Japan, account for around 80 percent of global fashion consumption.
Countries went into lockdown mode, and to the manufacturers’ surprise, major brands and retailers went “incommunicado”, said a Turkish manufacturer who wanted anonymity over concerns about future business relationships with leading brands.

“At first there was no communication at all from corporate buyers," he told Middle East Eye by phone from Istanbul.

"They were not saying, we will pay you late, or we’ll take the goods at some point. There was complete silence, even about goods delivered weeks or months before.”

While 80 percent of Turkish factories closed in the first several weeks of the lockdown - around 60 percent are open today - the sector was left with over $2.5bn in ordered inventory and a further $1bn in orders in production, or already produced, that were cancelled until further notice, said Hadi Karasu, President of the Turkish Clothing Manufacturers’ Association (TGSD).

“Factories were forced to cover the fabric and accessories they bought from brand-designated raw material suppliers," Karasu told MEE.

"These manufacturers operate at single-digit margins while they are being asked to keep the materials for an unforeseeable future.

To read the rest click here
Posted by Paul Cochrane at 4:52 PM

Are you looking for a loan company capable of meeting your financial needs? We offer user friendly services that meet your business and private needs. With just an interest rate of 2% we give you access to different categories of loans, from business loans($50,000 - $100,000) to tuition loans to car loans to mortgage loans($2,000 - $20,000) even up to vacation loans.We provide you with loans when the bank fail,low/ bad credit score can apply. Contact us now and get your loan decision within five minutes and loan approval and disbursal of funds within 24 hours to any country. Email us at: smallscaleloans@gmail.com or contact us on whatsapp @ +447451229283
stay safe, wash your hands regularly, practice social distance in public
We care @ rutherdam coperate group

I really very happy after getting this super amazing results and i wish you to continue give these types of tricks and tips as well.
Recently, i have got some positive live Kuwait Hindi News updates and this one is helpful.

By the ways thanks againandplease keep it up...