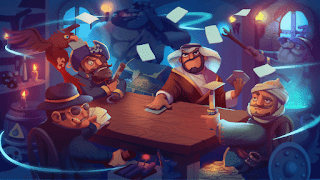 
Salaam Gateway: Middle Eastern app games developers have been rushing to launch new titles as millions are stuck at home due to COVID-19 movement restrictions and the holy month of Ramadan.

“Due to the situation developers have a once-in-a-lifetime chance to produce something, put it out there and make a splash,” Vincent Ghassoub, Co-founder and CEO of Falafel Games, a developer based in Beirut, told Salaam Gateway.
There are only a handful of mobile games developers and publishers in the Middle East and North Africa (MENA) that are either developing their own games, or re-working international ones for the regional market by translating content into Arabic and in certain cases, localizing the content for cultural specificities.

“The games market globally is bigger than Hollywood and TV, but in the MENA there’s just five or six developers and publishers, so tiny compared to the overall games ecosystem. We command a very small part of games spending in the MENA,” said Ghassoub referring to mobile apps and comparing them to other app games, internet games and games consoles.

While Ramadan has always been a major launch period for games in the region, just like the lead up to Christmas is a crucial sales time in Europe and North America, the COVID-19 lockdowns around most of the Middle East since March have prompted developers to speed up launch dates.

“We had not planned to be out for Ramadan, as developing a game takes a team of 15 people and around 15 months to get done. But as much of the Gulf has been living a Ramadan lifestyle - staying up at night - for over a month due to the lockdowns, we’re trying to be out before the end of Ramadan,” said Ghassoub of a new strategy game.

To read the rest go to: www.salaamgateway.com/story/covid-19-and-ramadan-super-prime-time-opportunity-for-the-middle-easts-mobile-game-developers
Posted by Paul Cochrane at 4:19 PM