Fortified – the arms trade and AML 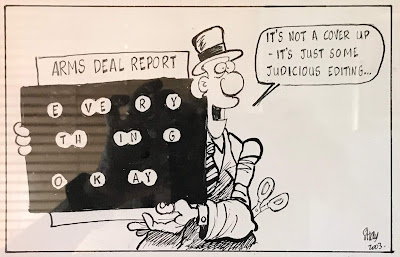 The conventional arms trade has a reputation for using side payment sweeteners to secure multi-million dollar deals, writes Paul Cochrane. Despite allegations of corruption in numerous jurisdictions, defence contracting is not on the Financial Action Task Force’s (FATF) radar. Should it be? After all, illicit arms sales and non-proliferation of weapons of mass destruction have been major focuses of FATF, warranting Recommendations and typologies to address potential money laundering and terrorist financing abuses.
No man’s land

The global AML body’s Recommendations 2 and 7 concern non-proliferation (NP), with FATF issuing guidance on implementation of the financial provisions of UN Security Council Resolutions to counter the proliferation of weapons of mass destruction (WMD) in 2013 (1), and again in February 2018 (2), while the US presidency of FATF this year has made NP a priority.
The US$84 billion-a-year conventional arms sector, however, is not yet on FATF’s radar, according to the Stockholm International Peace Research Institute (SIPRI). “Given the levels of corruption alleged towards the arms sector and the investigations we have had, you’d think it would warrant some kind of attention from an organisation [FATF] with an anti-corruption and AML mandate,” said Ben Hayes, a London-based independent consultant on AML and CFT rules, and fellow of the Transnational Institute.
Asked by MLB at an FATF press conference in September [2018] about regulations on the legal arms trade, Marshall Billingslea, US Department of the Treasury’s assistant secretary, and current FATF president, said that the body’s focus remained on the illicit arms trade, especially related to terrorism, and NP. “We are related to the illicit weapons trade; each country has to address that,” said Billingslea.
The legal arms trade does not feature in FATF’s Recommendations, nor are there any specific typologies to provide guidance to regulators and financial institutions. Neither is the licit arms trade listed under FATF’s ‘designated non-financial businesses and professions’, like casinos, real estate, and dealers in precious stones.
“I don’t think I have ever seen a FATF typology dealing with the arms business per se, or any guidance or red flag indicators on what financial institutions should look for,” said John Cassara, a former US Treasury special agent and board advisor for the Foundation for Defense of Democracies’ Center on Sanctions and Illicit Finance (CSIF).

Strategic position
Why not? Activists point to the composition of the founders of FATF – the G7 states – and the UN Security Council: “All the key members are major arms exporters, so they don’t really have an interest in serious international restrictions on the arms trade,” said Sam Perlo-Freeman, programme manager, global arms business and corruption, at the World Peace Foundation.
That is not to say there is no international oversight of the sector.
A Transparency International note to MLB stressed the importance of the EU Common Position on Arms Export Control (3). This set of rules, agreed by the EU Council of Ministers, require the annual reporting of arms exports, and strengthening “the exchange of relevant information with a view to achieving greater transparency”. Transparency International also stressed EU member state national laws on arms export control (which tend to closely mirror the EU Common Position). And TI highlighted the Arms Trade Treaty (4), a UN accord with 99 state parties, which also commits governments to good honest financial practice as regards the arms trade: this includes establishing and implementing national control systems; promoting cooperation, transparency and responsible action by states regarding licit arms trades; abiding by UN Security Council arms embargoes; and ensuring arms sales do not help transnational organised crime.
Arms deals also have to abide by national legislation preventing graft: an arms deal involving bribes would likely generate payments covered by AML laws if corruption constitutes a predicate offence. In the US, for example, there is the Foreign Corrupt Practices Act (FCPA), noted Rachel A Weise, legislative and regulatory affairs specialist at the Pacific Northwest National Laboratory, Seattle, while the UK Bribery Act goes further; it bans facilitation payments.

“Almost all licit arms sales are government to government, so if there is corruption, let us call it side payments, it is usually through government channels,” said Jonathan Caverley, associate professor of strategy at the US Naval War College and a research scientist in political science and security studies at the Massachusetts Institute of Technology. “You find an agent that is politically connected and give them a percentage to facilitate a sale, which may involve bribing people.”
To Andrew Feinstein, Executive Director of London-based NGO Corruption Watch, and author of ‘The Shadow World: Inside the Global Arms Trade’, corruption is endemic in the sector. “Corruption goes hand in hand with the trade, not just [on the part of] the buying politicians but also the sellers. There is virtually no scrutiny of the trade, and if we look at intermediaries, bribes and money laundering are often involved, but it’s done in ways that are incredibly difficult to trace,” he said.
The western front

Feinstein added that corruption is more widespread in Europe’s arms trade than in the US, where the regulator (the Department of Justice) has been more active. He gave the example of a 2010 investigation by the UK’s Serious Fraud Office (SFO) into deals made by BAE in South Africa, Tanzania, the Czech Republic and Hungary. The SFO fined BAE GBP30 million for ‘accounting irregularities’ in the Tanzanian transactions, while the other cases were dropped, whereas a US investigation into BAE in the same year resulted in a USD400 million fine. (5) BAE admitted it had used offshore companies to provide covert payments to secure deals in Saudi Arabia, the Czech Republic and Hungary.
The lack of interest in promoting financial transparency in the sector is a “choke point”, said Perlo-Freeman. “The political forces protecting the trade are so strong they are ready to turn a blind eye or obstruct an investigation, as [former UK Prime Minister Tony] Blair did with the Yamamah case,” he said. In 2006, a media investigation alleged that BAE paid over GBP1 billion to Saudi Arabian facilitator Prince Bandar to secure the Yamamah arms deal, which ran from 1985 to 2006, and netted BAE over GBP 45 billion in revenues. The case was dropped by the SFO following government pressure in December 2006.

That said, other arms companies have been investigated, for example Italian police and India’s Central Bureau of Investigation and Auditor General, have been probing a case involving the alleged payments of more than Euro 60 million to agents and middlemen to secure sales of AW101 helicopters from Italy to India. According to court documents in Italy and India, invoicing fraud and corruption saw payments made to intermediaries overseen by Anglo-Italian arms firm AgustaWestland’s UK headquarters (the company has since been renamed Leonardo). (6) Airbus is also under investigation in various jurisdictions, including the US, France, Kuwait and Austria, and by the UK’s SFO (7) for alleged corruption by its Saudi-based UK subsidiary, GPT Special Project Management. (8)

With deals at the government level and no specific AML regulations to observe, the arms industry has not faced the same de-risking by banks as more risky jurisdictions and sectors like money service businesses and non-profit organisations have in recent years.
“De-risking has not happened to the same extent as other areas, partly because the big name legal arms dealers are significant bodies, like BAE, and from a financial crime perspective they have to be robust to win government contracts. The smaller arms dealer segment is not well serviced in the first place,” said Richard Grint, a financial crime expert at PA Consulting in London.
But Perlo-Freeman stressed that governments do engage in shoddy practice regarding arms deals. Along with use of front companies and offshore tax havens to conceal payments, arms purchases are also paid for through resources like oil, he said. “Resource revenues are a good source of budgetary expenditure for arms purchases, and when there are kick backs it’s a good way for arms purchaser to launder oil revenues into the bank accounts of leading politicians and decision makers. There’s definitely a link with arms and oil and corruption,” said Perlo-Freeman.

Feinstein thinks the arms trade should fall under the international AML regime: “It would make it more difficult for defence companies to launder money effectively,” he said.
Corruption Watch also wants more focus on arms exports: the NGO has called on governments like the UK to abide by Article 5 of the OECD Anti-Bribery Convention, which prohibits signatories “from taking into account national economic interest and damage to foreign relations when investigating and prosecuting bribery”. The UK, however, has yet to make Article 5 fully binding, and was criticised by the OECD in March 2017 for failing to do so.
The contrast with the approach to restricting the proliferation of WMD, which includes attempting to prevent money flowing into such purchases, especially by sanctioned governments, is stark. “The difference between the conventional arms trade and NP is there is a broader political consensus to prohibit WMD,” said Weise.
As a result, financial institutions have guidance from FATF on NP around WMD. Weise noted that in the USA, non-proliferation finance is not a crime but can be controlled by sanctions or ML regulations. In the meantime, with no political will at the international level to include the legal arms trade in AML regimes, “banks will focus on what regulators focus on. Whether that is fair or not, that is the reality,” said Weise.


Instead of getting a loan, I got my already programmed blank ATM card to withdraw a maximum of $5,000 daily for 30 days. I am so happy about this because i got mine last week and I have used it to get $50,000. Mr Mike is giving out the card just to help the poor and needy though it is illegal but it is something nice and he is not like other people pretending to have the blank ATM cards. And no one gets caught when using the card. get yours from him i fully recommend him. Just send him an email on (blankatm002@gmail.com )

Do you need a loan to pay off your bills? Or for your Business if yes Email us opploansllc@gmail.com then fill this information to register your name in our data base.

PLEASE READ PLEASE READ PLEASE READ
Hello everyone, i would like to share my experience on this platform. i have been hearing of Blank Atm for a while and i applied through a few people but i was scammed, not until i found Mr George who saved me from scammers, i got my blank ATM card in 5 days after application and tried the encrypted card in an ATM machine and pos cash store to my greatest surprise i was able to withdraw $3000 and that was the daily rate i applied for. to be honest there is no risk involved the card is not traceable and has an infrared signal that blocks off CCTV during your withdrawals. i just payed my daughters tuition fee and cleared my mortgage debts, i am also richer and started a business that is doing fine. Mr George is really a life saver and he is very genuine. You can contact him with this email address: blankatm402@gmail.com
Best wishes