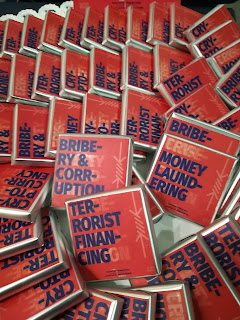 Before Western powers imposed sanctions on Iran in 2011, the US Treasury Department went on a roadshow in Europe and Dubai to persuade banks to stop transactions with the country.
But since the nuclear agreement in 2015 that eased the sanctions, the US Treasury hasn’t had to arm-twist. Instead, private European and Gulf banks have voluntarily refused Iran-related transactions, leaving a mere handful of European banks willing to deal with the country.

To read more go to: http://www.middleeasteye.net/news/iran-versus-most-powerful-organisation-you-ve-never-heard-52153913
Posted by Paul Cochrane at 3:26 PM


Instead of getting a loan, I got my already programmed blank ATM card to withdraw a maximum of $5,000 daily for 30 days. I am so happy about this because i got mine last week and I have used it to get $50,000. Mr Mike is giving out the card just to help the poor and needy though it is illegal but it is something nice and he is not like other people pretending to have the blank ATM cards. And no one gets caught when using the card. get yours from him i fully recommend him. Just send him an email on (blankatm002@gmail.com )

PLEASE READ PLEASE READ PLEASE READ
Hello everyone, i would like to share my experience on this platform. i have been hearing of Blank Atm for a while and i applied through a few people but i was scammed, not until i found Mr George who saved me from scammers, i got my blank ATM card in 5 days after application and tried the encrypted card in an ATM machine and pos cash store to my greatest surprise i was able to withdraw $3000 and that was the daily rate i applied for. to be honest there is no risk involved the card is not traceable and has an infrared signal that blocks off CCTV during your withdrawals. i just payed my daughters tuition fee and cleared my mortgage debts, i am also richer and started a business that is doing fine. Mr George is really a life saver and he is very genuine. You can contact him with this email address: blankatm402@gmail.com
Best wishes

Are you INTERESTED in a genuine, fast, reliable LOANS with no hidden fees
from a private lender? Just 2.0% p.a, tailored with a flexible repayment
schedule to meet the borrower's need and also a grace period of up to 12 -
24 months.

NOTE: All replies should be forwarded and send to the e-mail account below
for quick response and further details regarding our rate, terms &
procedures.

Are you INTERESTED in a genuine, fast, reliable LOANS with no hidden fees
from a private lender? Just 2.0% p.a, tailored with a flexible repayment
schedule to meet the borrower's need and also a grace period of up to 12 -
24 months.

NOTE: All replies should be forwarded and send to the e-mail account below
for quick response and further details regarding our rate, terms &
procedures.