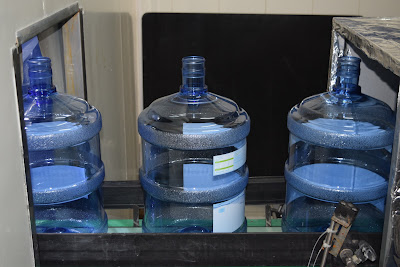 Not many consumer product segments have steady year-on-year growth regardless of the economic environment. Nor are there many products that are the same price as they were a decade ago. But as the marketing saying goes, water is life, and there is plenty of competition for consumers of bottled water.

"You can consider bottled water in Lebanon as a basic good. You don’t have any alternative for drinking water, so we’ve never really been affected by the political situation, nor the economic situation,” says Merched S. Baaklini, deputy general manager of Bev Holding, producer of Rim.


Sector players attribute the rising demand for bottled water to both the healthy lifestyle trend, with consumers increasingly opting for water over soft drinks, and government mismanagement of the water sector. This ranges from health scares related to the lack of oversight of water companies — especially unlicensed bottlers, — to shortages in government supply. When the taps run dry, consumers are left unsure about the quality of water delivered by truck to their apartments.

The trash crisis of summer 2015 caused another spur in business according to bottlers, fueled by mounting public concern about the government’s inability to deal with waste and environmental degradation. Tests carried out by the Lebanese Agriculture Research Institute (LARI) showed that, in March 2016 — nine months after the trash crisis started — leachate from dumpsites across the country entered the groundwater, with bacteria levels reaching 2,000 trillion per milliliter (ml) the accepted norm being less than 200 per ml.

The Class A bottlers — established brands licensed by the Ministry of Public Health (MoH) — account for an estimated 30 percent of the market, according to industry insiders, valued at around $160 million a year. The remaining 70 percent are more localized in distribution terms and unregulated, with just 42 out of some 1,000 bottlers licensed.

The surge in bottlers is most evident in the supply of 10 liter containers, which, other than the water stores typically found in the suburbs and countryside that fill up 10 and 20 liter jerry cans, are the most economical, costing from LL1,000 to LL1,750. “The big companies never had the 10 liter bottles as part of their portfolio, typically having the 330ml, 500ml, and the 1, 1.5 and 2 liter bottles, then jumping to the 18.9-22 liter size [known as the ‘gallon’]. Today, these companies are tackling the 10 liter market, as it’s an attractive and growing market,” says Roy Hage, manager of Petform, one of the country’s top three manufacturers of consumer grade plastic bottles. Petform produces some 70,000 bottles per hour, and Hage estimates that there are over 250,000 10 liter bottles produced in Lebanon each day. 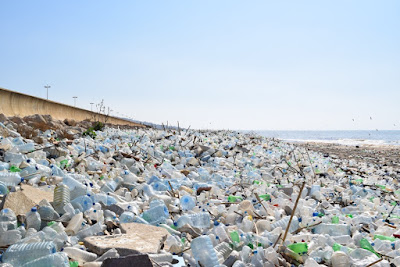 Minimal plastic is recycled in Lebanon, ending up in garbage dumps and on beaches, like here in Costa Brava, south of Beirut.

While bottlers have largely dismissed concerns about depleting water tables and the unreliability of snow melt (the source of over 50 percent of the country’s water) Roland Riachi, visiting assistant professor at the Political Studies and Public Administration department at AUB, says that demand will rise due to the depletion of water resources, and that the number of wells has risen from 3,000 in 1970 to 80,000 today, or eight wells per square kilometer. “This will lead to a drop in tap water supply, so there’ll be more demand for water delivery, for drinking, and domestic use,” he adds. LARI estimates that the average depth of groundwater across the whole country has dropped on average by 70 to 80 meters, and projects it will fall further.

The problem is the lack of regulation in the water sector, be it from agricultural use, to tapping wells for drinking water. By law, water companies pay the government LL1,000 for every 1,000 liters extracted, and are limited to withdrawing 100,000 cubed meters a day from a depth of less than 150 meters. Most water companies stated that they pay according to a metered system, but others, such as Tannourine, said the water was free.

The lack of oversight of the overall sector and depleting water resources are already causing logistical issues for companies. Some bottlers concede that they stockpile during the winter months due to shortages in the summer, and even buy water off other bottlers when supplies run low.

“Most water companies are seeing a reduction in water availability. The illegal bottlers are about to cause a catastrophic disaster, as they’re drilling near the shorelines and emptying aquifers,” says Marcel Hage, chairman and CEO of Talaya. “If more people favor natural drinking water, and the supply is short, prices will eventually go up. But if the situation continues as it is now, of ‘water as water,’ no matter where from, prices will remain stable.”

Economics 101 teaches us that with demand outstripping supply, prices should go up. But the theory does not yet apply to local bottlers due to the low cost of extraction, the lack of government oversight, and high competition. “Prices haven’t changed because the price is the cost of the bottle, not the water inside. This is why you see different brands with the same price,” says Reine Berbery, marketing manager at Tannourine.

The number of new entrants into the market is difficult to quantify due to the number of unlicensed bottlers. But, at the higher end, there are still new entrants, such as a $7 million bottling facility in Bekaa’s Yammouneh, announced in May.

Just as Nestle shook up the sector when it bought Sohat and introduced Nestlé Pure Life, Pepsi’s launch of its global brand Aquafina in July 2015 has triggered what players call a price war. “Aquafina has made it harder for everyone, as they have the distribution model, and gave it out for free with Pepsi when they launched,” says Alain Tabourian, chairman and CEO of Interbrand, which owns Sannine.

According to SMLC Pepsi-Cola’s Executive General Manager, Bassem Ali, Aquafina has had “strong double-digit growth” due to the “largest distribution network in the country.” The top seller is the 500ml bottle, but the company is mulling entering the gallon market, which industry insiders estimate at around 25 to 30 percent of the licensed market.

Competition to get on supermarket shelves is fierce, as that is where consumers have the most choice, and the best prices for licensed brands. This is down to distribution costs, with home delivery costing more, albeit ensuring more consumer loyalty. Industry players estimate distribution at 30 to 40 percent of operating costs.

“As long as consumers can easily switch brands, and can’t tell the difference between one water brand and another, the higher the competition,” says Riwa Daou, a research analyst at Blominvest Bank.

Such competition extends to imported and sparkling waters. Nestlé had dominated the sparkling water segment with brands Perrier and San Pellegrino, but Rim introduced its own sparkling water brand in 2016, and Tannourine introduced San Benedetto earlier this year. The brands have also ventured into glass bottles to appeal to higher-end consumers, especially at restaurants.
“We consider selling under cost as part of marketing. This is the competition in the market, even to give the bottle for free (to restaurants) as it’s good for our image,” says Tannourine’s Berbery.

Other brands have also introduced glass bottles, but  only market newcomer Talaya has glass gallons, one of only three companies worldwide to do so. Talaya’s CEO and Chairman, Marcel Hage, says glass gallons have reached 25 percent of their overall sales in less than six months, with overall growth of 50 percent compared to 2016.

Glass gallons are only expected to appeal to a small number of consumers due to the high costs, at LL7,500 for 15 liters, and a $15 deposit fee, compared to LL6,000 for 18.9 liters in plastic gallons, and a similar deposit. Costs are high due to the cost of glass itself, imported from Europe, with the 300,000 gallons estimated to cost over $3 million. 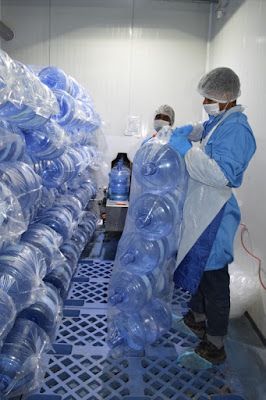 Competition is so acute that nearly every bottler had something negative to say about their competitors, ranging from illicit practices and mislabeling, to exposing plastic bottles to the sun, to burning trash during the 2015 crisis.
Sannine was accused of requesting the removal of the manufacturing date on gallon bottles to not be constrained by longevity issues. Tabourian denies this. “There’s no law that states you have to put the date on the container, only for production. We were asking to amend our traceability code in case there’s a problem with a specific lot of orders. It has nothing to do with the consumer, but was blown out of proportion,” he stated in an interview with Joe Maalouf on LBC.

Nestlé Pure Life was accused of not being correctly licensed, but Nestlé says that both Sohat and Nestlé are licensed by the MoH under the name Société des Eaux Minerales Libanaises, under Natural Mineral Water and Drinking Water respectively.

Such competition among players will continue as consumer demand continues to rise amid ongoing mistrust and mismanagement of public water sources. What may happen is consolidation, whether or not the government clamps down on the several hundred illegal bottlers. “There are enough players in the market, so there will be consolidation. The name of the game is distribution, and moving a lot of product at a low cost,” says Tabourian.

Hello Everybody,
My name is Mrs Sharon Sim. I live in Singapore and i am a happy woman today? and i told my self that any lender that rescue my family from our poor situation, i will refer any person that is looking for loan to him, he gave me happiness to me and my family, i was in need of a loan of $250,000.00 to start my life all over as i am a single mother with 3 kids I met this honest and GOD fearing man loan lender that help me with a loan of $250,000.00 SG. Dollar, he is a GOD fearing man, if you are in need of loan and you will pay back the loan please contact him tell him that is Mrs Sharon, that refer you to him. contact Dr Purva Pius, call/whats-App Contact Number +918929509036 via email:(urgentloan22@gmail.com) Thank you.

Are you a business man or woman? Do you need funds to start up your own business? Do you need loan to settle your debt or pay off your bills or start a nice business? Do you need funds to finance your project? We Offers guaranteed loan services of any amount and to any part of the world for (Individuals, Companies, Realtor and Corporate Bodies) at our superb interest rate of 3%. For application and more information send replies to the following E-mail address: standardonlineinvestment@gmail.com
Thanks and look forward to your prompt reply.
Regards,
Muqse