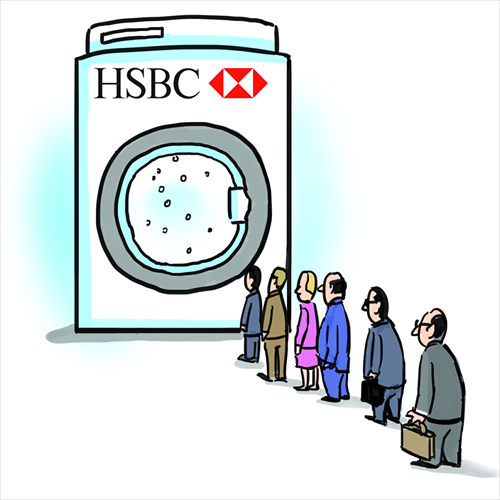 The scandal around banking giant HSBC's Swiss subsidiary being a conduit for tax evaders has opened a can of worms in London. It is not just the media revelations that the bank profited from doing business with tax evaders, dictators and criminals for decades. It is also that the tax evaders - prominent businessmen and the like - were major donors to political parties. It has added further pressure on a sector that is far from popular with the public due to the government bailouts of major banks in 2008 at the same time as tough austerity measures were introduced.

The scandal further highlights the less than level playing field of financial compliance. Over the past 15 years, the US, Britain and the OECD's Financial Action Task Force (FATF) have forced jurisdictions around the world to pass regulations to improve anti-money laundering (AML) and countering the financing of terrorism (CFT) laws. However, the HSBC case and others in recent years have poked holes in the arguments of jurisdictions dictating to others what they need to do.

Indeed, you cannot require other countries to improve their regulations and oversight if you are not squeaky clean yourself. The balance of power though is clearly in the favor of the major financial hubs of the world, which, for now, are in the West and its sphere of influence.

The jurisdiction all countries are wary of is the US Treasury. It has teeth and has been dishing out fines in recent years to financial institutions not in compliance. Take the case of Lloyds Bank, fined $350 million for flouting sanctions on Sudan and Iran. HSBC is again a case in point, fined $1.92 billion in 2012 for deficiencies in its AML regime.

Banks in other jurisdictions are not so lucky however. In 2011, the Lebanese Canadian Bank disappeared from the face of the earth for being, in the words of the US Treasury, a bank of "prime money laundering concern" for connections to the Lebanese militant group Hezbollah. The bank didn't have a chance to pay a fine. It is evidence of the politics at play in AML and CFT, and where the financial power lies.

The US' Foreign Account Tax Compliance Act (FATCA) is a further example. Implemented last year, it requires all financial institutions (FIs) to report to Washington any American account holders in order to collect tax outside of the US. To implement FATCA, it is estimated to cost FIs around $8 billion - roughly the same amount the US will collect in tax revenues from the Act over 10 years. Yet it is a bill FIs will have to foot to act as tax enforcers for the US, or face being blocked from the US market.

The elephant in the room is that the biggest tax havens on the planet, and where the most money laundering and financial crime occurs are where most capital is transacted - New York, London and Switzerland. London handles a staggering 11 percent of the world's banking. The state of Delaware is a major hub for tax evaders due to its low corporate governance requirements, as is Wyoming. The British Channel Islands and other dodgy tax havens are home to trillions of dollars in illicit and black money.

On top of it all, the major financial centers only get middling scores in the Basel AML Index Country Risk Ranking 2014, the criteria based on adherence to standards and risk categories such as financial regulations, public transparency, corruption and rule of law. The US for instance is ranked 110 out of 203 jurisdictions, Britain 135 and Switzerland 96.

For legislation to truly work and for jurisdictions to willingly, rather than coercively, implement such regulations, the world's financial centers need to be clean. A good push would be for political financial support from tax evaders to immediately stop, followed by more stringent adherence to the rules at home as well as at foreign subsidiaries. Indeed, it was not the Swiss or British regulators that exposed the malpractice and dubious financial ethics of HSBC. It was whistle-blowers and investigative journalism.

Such exposures are good news though. It will force the financial sector to be more ethical, and to realize they are under greater public scrutiny. And it will push institutions, regulators, and politicians to practice what they preach.

Posted by Paul Cochrane at 1:47 PM