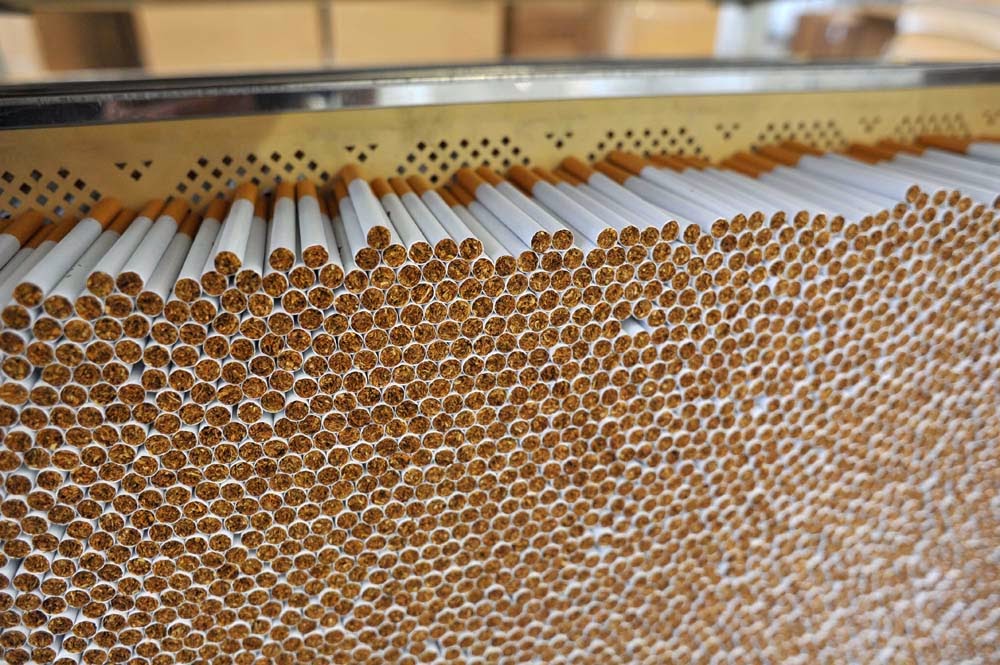 The cedar tree may be the national symbol, but when it comes to smoking the national cigarette brand Cedars, it is the Syrians that have the strongest affinity.
In fact, a correlation can be drawn between the number of Syrians in the country and sales of Cedars: more Syrians in Lebanon equals more Cedars sold. Back in 2005, in the months after the Syrian military withdrew along with thousands of Syrian non-military personnel, sales of Cedars plunged by 50 percent. Government-owned Régie Libanaise des Tabacs et Tombacs (RLT) attributed the drop directly to the withdrawal, with soldiers and low paid workers the main consumers of what was then — and still is now at LBP 750 ($0.5) per pack — the cheapest smokes on the market.
Several years on, with Syrians back en masse, sales of Cedars have rebounded, surging from 94,744 cases (of 10,000 cigarettes, or ‘sticks’ as they are referred to in the trade) sold in 2011, to 195,060 cases in 2013. With the number of registered Syrian refugees at well over 1 million, 2014’s sales have already surpassed 2011’s totals, with 108,418 cases sold in just the first half of this year.
Yet while sales are recorded, RLT does not know who the cigarettes are sold to, or if they’re consumed locally or exported by wholesalers. “We think [the rise in sales] is mainly due to the Syrian refugees, but also [due to] exports to Syria and elsewhere,” says Pierre Hedari, RLT’s head of import and export.


The turnaround in sales of Cedars is clearly a boon for the manufacturer at its Hadath facilities. “We’ve had very high sales, are at full production capacity, and will buy new machinery to satisfy the demand, having gone from one shift manufacturing Cedars to two shifts,” adds Hedari.
Overall sales of cigarettes have increased since the Syrian crisis, rising from 1.24 million cases in 2011, to 1.55 million in 2012. Sales dipped marginally in 2013, to 1.21 million cases, and in the first half of 2014 reached 539,415 cases, signaling annual sales similar to last year.
Last year’s drop was due to a rise in smuggling into the country, a negative spinoff from the Syrian conflict, estimated by international manufacturer British American Tobacco (BAT) at 800 million sticks, while the legal market is 10.7 billion sticks per year. The rise in smuggling and a downward shift in sales of Class A cigarettes in favor of cheaper Class B smokes — rising from 27 percent of sales in 2012 to 37 percent in 2013 — prompted RLT to introduce a new brand, Maestro and Maestro Light, in May.
“It’s at a low price to combat cheap smuggled cigarettes. Our goal was to sell it at LBP 500 ($0.3) per pack, but you have to give a share to the retailer, so Maestro is selling for LBP 750 ($0.5),” says Hedari. Although in its early days, sales so far have been below expectations, with Maestro accounting for no more than 10 percent of RLT’s sales. Even if the new brand does not boost consuming, RLT’s overall revenues to the state treasury from $565.2 million in 2013 to $1.1 billion are expected to rise.
And if sales of Cedars are anything to go by, RLT is on track to becoming a bigger contributor to the state coffers, with its total market share having grown from 7.6 percent in 2011 to 20.1 percent this year. Ironically, such a boon for the budget may be dependent on Syrians’ continued fondness for the nation’s Cedars.