US has left region wracked by sectarian splits 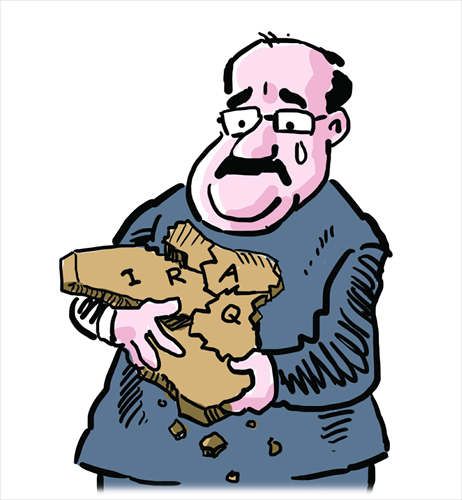 
Earlier in the year, I was a guest on an Iraqi TV channel to discuss the advances that the Islamic State in Iraq and Syria (ISIS) has made in Iraq.

In January, the group of hard-line Sunni Islamists had taken the city of Fallujah and were gaining in strength in Anbar province. The weakness of the Iraqi army was apparent, as was the leadership of Prime Minister Nouri al-Maliki in its failure to stop the advance of this Al Qaeda-esque group.

While the ISIS advance made news in the Arab world, the world's media lens was focused elsewhere, on the conflict in neighboring Syria, but it was obvious that ISIS posed a clear and present danger to Iraq's stability.

This was all discussed on the program, but the channel's Shia Muslim leanings and Iranian backing made it hard to address the malign role of Maliki and the US backing of Shia groups. The region's media is now just as sectarian as its politics.

The world started to take notice recently that the conflict in Iraq did not end when the US left, and that the Pandora's box the US had opened when it invaded in 2003 has not been firmly closed.

Some 1,000 ISIS fighters overran two Iraqi army divisions of 30,000 soldiers in Mosul, the country's second largest city, and have made further territorial gains.

This mess falls squarely in the court of the US and Britain, which beat the drums for war against the Saddam Hussein regime, ostensibly over weapons of mass destruction but also touting the spurious claim that Iraq was connected to Al Qaeda and therefore linked to the September 11 attacks.

There was no Al Qaeda or militant Islamic extremism in Iraq prior to 2003, but the overthrow of Hussein, the deliberate disintegration of the Iraqi army by the US, the use of sectarian death squads to further divide and rule, and a new constitution drafted under US auspices that shifted the sectarian balance away from the Sunnis, provided the fuel for a fire that is still burning.

Under a resurgent Shia government, which has led the country since 2005, the Sunnis felt marginalized and unrepresented, resulting in resentment.

This explains why ISIS has support in areas it occupies, not overly because people support the group's aims of an Islamic state, but to counter Shiite dominance and the failure of imposed federalism.

The US war on terror has created more terror, and in the broken and destroyed Iraq that Washington left behind, has created fertile territory for extremism and violence to flourish.

Counter-terrorism can only work if it addresses core grievances and issues, both political and economic.

But while the US war on Iraq cost anywhere from $800 billion to $3 trillion, depending on the estimates, just $60 billion was spent on reconstruction and aid.

Iraq is struggling to get back on its feet economically, with the second National Development Plan for 2013-17 requiring $357 billion to improve critical infrastructure.

ISIS' advance will scupper such plans, and the Maliki government is under tremendous pressure. There are only hard choices left.

Maliki will have to create alliances with nationalist Sunnis to regain the north. The Iraqi army did not retake Fallujah earlier in the year, as tribal leaders convinced Maliki to not destroy the city.

While critics opposed this move, it could have further sidelined already disgruntled Sunnis. They face the same quandary now, if the Iraqi army brutally retakes Mosul and other ISIS-held areas.

Only through addressing core sectarian gripes and through a collaborative military made up of different sects can Baghdad avoid being seen as overly pro-Shia and ready to crush the Sunnis.

If that does not happen, fuel will be added to the fire of a sectarian war in the Middle East that is bubbling dangerously close to boiling point.