Mum's the word on Saudi wars 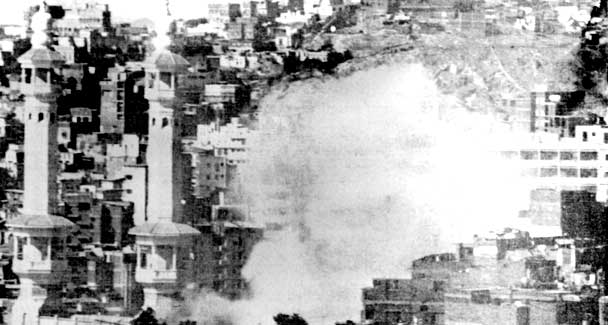 Smoke billows over Mecca in November 1979


The veil of mystery that hangs over Saudi Arabia's biggest military operation since the Gulf War in Yemen does not come as a surprise. When it comes to security issues the kingdom has a particularly poor record of letting us know what is going on, while trusting in censorship and petrodollars to make sure that whatever collective recollection remains is kept hushed up.

But such lack of transparency regarding how crises are handled by Saudi Arabia – the region's most powerful country and its largest economy – belies how serious the situation is in the Arabian Peninsula and how events can get out of hand, usually with longterm ramifications.

This has widespread security and economic concerns for the Gulf, given the peninsula's geo-strategic importance as an energy provider. And the Gulf can ill afford more destabilization on the coattails of Dubai's debt debacle.

Curiously, the cusp of 2010 signals a macabre 30th anniversary of a political-religious event that has ramifications connected to the current situation in Yemen and beyond, due to Riyadh's draconian management style.

In late November, 1979, the Great Mosque of Mecca was seized by hard-line Islamist gunmen bent on overthrowing the Saudi monarchy and introducing a new redeemer – the mahdi – on the day marking 1,400 years of Islam. No word was given to the outside world about the seizure for two days, yet the siege shook Saudi Arabia's foundations for two long weeks, challenged the kingdom's position as the guardian of the two holy cities of Islam, triggered a Shiite uprising in the east of the country, and unleashed forces that led to the rise of Al Qaeda.

Then, less than a month after the Saudis' disastrous handling of the siege – amid botched attacks the use of artillery and armored vehicles wrecked the Great Mosque while several hundred were killed – the Soviet Union invaded Afghanistan on December 24. This created the spark for a Machiavellian strategy hit upon by the United States and Saudi Arabia for the kingdom to export its “bad boys” – the hard-line Islamists – to take on the Soviets. And we all know where that led.

But back in late '79 the truth was far from clear, as it is now in regard to Riyadh's involvement in attempting to crush the Houthi rebellion in Yemen.

Blame for the siege was first leveled against the fledgling Islamic Republic of Iran, then labeled an American-Zionist plot to strike at the heart of Islam. Indeed, Washington DC had to beg Riyadh to say the United States had nothing to do with it as US embassies came under attack across the Muslim world, with the embassy in Pakistan burned to the ground.

Some people today still believe the Iranians were behind the siege, as it has been so hushed up in the history books and documentation outright banned in Saudi Arabia. In fact, there is only one book on the subject, bar dissident Saudi literature - Yaroslav Trofimov's “The Siege of Mecca”. This would be comparable to a modern history of the US not mentioning the 9-11 attacks.

What is at risk now is a repeat of 1979, with no coherent story coming out of the Arabian Peninsula about what is happening given all the propaganda at play.

Iran is being mentioned as one of the backers of the Houthis. This could well be true, yet a fact that Tehran denies as vigorously as Riyadh denies it is operating in Yemeni sovereign territory or the allegations of US involvement in advisory roles to the Saudis and Yemenis. On top of this, for a deeper understanding of the current conflict the fallout from '79 needs to be understood.

The regular 'terrorist' attacks that occur within Yemen have come from splinter groups of the Islamists sponsored in the 1980s by the Sanaa government, the US and Saudi Arabia to counter the Marxist south – just as in Afghanistan in the '80s. These bankrolled Islamists, along with returnees from Afghanistan, were later used to fight the Houthis in the north, a policy that continues until today.

The Houthis, meanwhile, are fighting against this Islamist trend in the Yemeni establishment that was so successfully nourished during this period, and to oust President Ali Abdullah Saleh - who came to power in 1978 - rather than end the federal republic of Yemen per se.

Saudi Arabia's involvement is similar to Afghanistan, with the war on the Houthis another Saudi proxy war that is “not a war” - it has not officially been declared - despite reports of Saudi armed forces bombing within the borders of the kingdom and in Yemen itself, as well as the navy operating along the Yemeni coastline.

Given Saudi Arabia's track record, pressure should be exerted on the kingdom to give a clearer indication of how all of this may play out. No one wants the kind of blowback that the world has endured for the past 30 years for the sake of maintaining Riyadh's veil of mystery.

Posted by Paul Cochrane at 4:44 PM